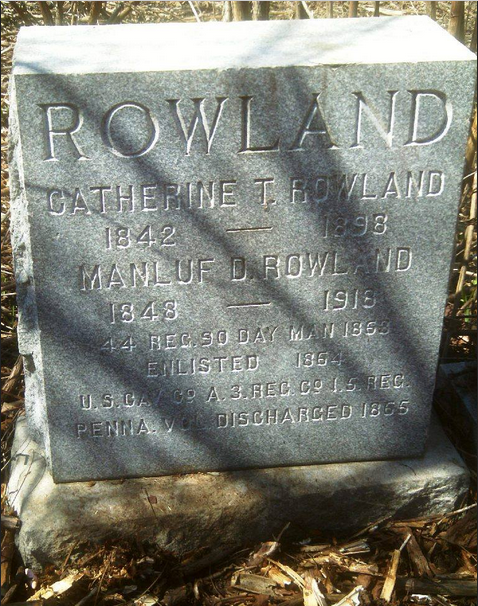 Military and census records show his first name as Manluff, Manleff, and other misspellings, but Manliff occurs most often. He was the second son of Jonathan and Sarah Rowland, and the brother of William, whose gravestone in Section E includes a stone replica of the ironclad ship, the USS Monitor.

Manliff experienced the death of two of his siblings in 1859 and 1860, and his mother’s death in 1863. That year, Pennsylvania’s governor issued an urgent plea for volunteers to defend the state from a Confederation invasion, which turned out to be the battle of Gettysburg. Manliff was only 14 but he and his brother signed up on June 30th with Company G of the 44th Pennsylvania Militia. They were known as 90-day militias because of their temporary status.

The battle was over July 3 and the militia was dissolved August 27, but Manliff didn’t stay at home long. He joined Company A of the Third Pennsylvania Cavalry five months later. The unit was also called the “60th Regiment Pennsylvania Volunteers,” serving at Manassas, Antietam, Gettysburg, and the Siege of Petersburg, among others. It became part of the 5th Pennsylvania Cavalry May 8, 1865, and disbanded in August.

Manliff lived through a lot in two years and he still wasn’t 18 years old. It’s even possible he experienced what today is called post-traumatic stress after coming home and deciding what kind of career he would have. He did decide on a Dutch girl, Catherine Schone, to be his wife in the next year or two, and he was presented with a son, Manliff Jr.,  just after he turned 20.

Most listings in the city directories show he was either a laborer or a stevedore, or dock worker. They had another son, Edmund, in 1873, but he developed tuberculosis after having double pneumonia and died in 1889. Their only daughter, Maggie, was not quite 3 when she died in 1881 of indigestion. Catherine died of pneumonia in 1898.

Manliff remained a widower and continued working in the 20th century as a laborer in a lumber yard while drawing his veteran’s pension. He moved to Gloucester City, New Jersey after the 1910 census, and that’s where he died in 1917. Manliff Jr. paid tribute to his father’s military record on his gravestone, while Maggie and Edmund share a stone in the same plot.