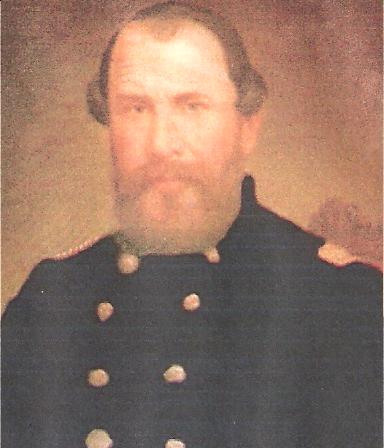 Joseph Hill Sinex was born in Delaware, the third child of Seneca and Sarah Hill Sinex.  After moving to Philadelphia, Joseph married Mary C. Duffield at Salem Methodist Episcopal Church on October 29, 1848. Joseph and Mary would have 6 children; 4 would live to adulthood.
In April of 1861, at the start of the Civil War, Joseph mustered into service as Captain of Company D of the 17th Pennsylvania Infantry and was discharged in August.  During the fall of 1861, the 91st Regiment Pennsylvania Volunteers was recruited in Philadelphia.  Among those mustering in that December was Joseph.  In January 1862 the regiment moved to Washington then Virginia, seeing action in Fredericksburg and Chancellorsville .  By July of 1863, when they reached Gettysburg, Joseph had been promoted to Lt. Colonel.  At six feet four inches, he must have been an imposing figure on the battlefield. The 91st fought in the Battle of Little Round Top on July 2.  Although a victory, the Union army would suffer more than 1700 casualties.  The majority of the regiment re-enlisted and returned to Philadelphia for furlough in January 1864.  After 6 weeks at home, the group moved on to Washington under the command of Joseph Sinex.  Once again the troops engaged in skirmishes in Virginia.  Lt. Colonel Sinex was one of the more than 13,000 wounded during the battle of Spotsylvania Court House, suffering his injury on May 12, 1864.  He was discharged, along with his fellow members of the 91st on July 10 and the regiment returned to Philadelphia on July 12.
After the war Joseph and his family remained in Philadelphia where he died on October 6, 1892, just one day shy of his 73rd birthday.  His occupation at the time of his death was hotel keeper. He is buried in Mt. Moriah Cemetery along with several members of his family.