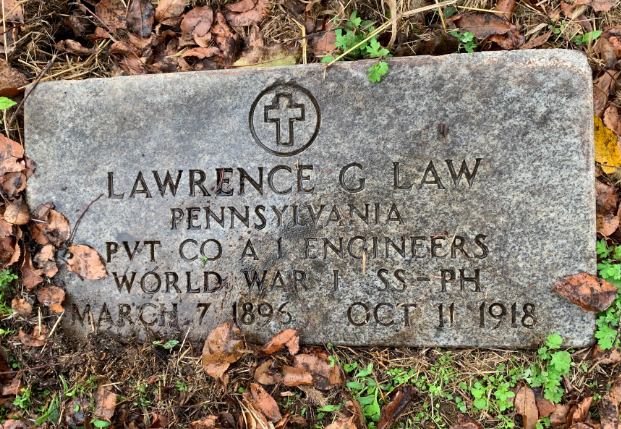 At the dawn of the 20th Century, the Law family was living in Philadelphia and there were two daughters and a son. A few years later Lawrence Senior moved the family to a southern Delaware farm, but by 1918 his family was back in Philly and his wife was listed in that year’s city directory as a widow.

Lawrence Junior had just turned 21 when the United States entered the Great War. He left his job as a mechanic to enlist on May 6, 1917 and left for France in August with Company A of the 1st Engineer Regiment. The men in these units worked on digging,  building, and repairing roads, bridges, and railroads in addition to fighting as soldiers when called upon. They endured both the hard physical labor involved in construction as well as the threat of death like any other soldier.

Private Law worked like that for over a year. Then he was killed by enemy fire on October 11, 1918, one month before the war was over. His body was returned in November, 1921 for a funeral service and burial in Section 122, Lot 11. His sister submitted an application in 1965 for a military headstone, which indicates that he was awarded the Silver Star and Purple Heart, posthumously.