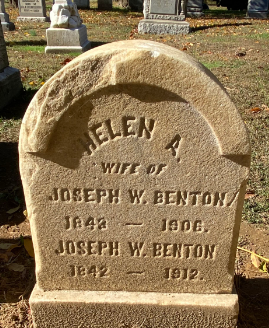 Many women sailed to America with their children, to be met by family members who had come before them. Rebecca Benton did so with six children, to be met by her husband John and eldest daughter Mary. She left England from Liverpool, arriving in New York on November 6, 1841, and Joseph was born nine months later as the Bentons settled in Philadelphia. Two more children were born which brought the total to 10. By 1850 John was working in a brass foundry along with his two oldest boys.

Joseph had to rely on all of his siblings to get through the year 1852. That was when both of his parents died. Presumably it was Mary, in her mid-twenties, who became the matriarch of the family.

When his country called for soldiers at the outbreak of the Civil War, Joseph was quick to respond. He enlisted on May 28 1861 in Company C of the 26th Pennsylvania Infantry. He took a bullet in his left hip at the Battle of Gettysburg on July 2, 1863, and was afflicted with it the rest of his life. After reenlisting at the end of the year Joseph was transferred a few months later to Company K of the 99th Infantry and promoted to Corporal. He participated in the Siege of Petersburg, the surrender at Appomattox, and the parade in Washington known as the Grand Review of the Armies in May, 1865 before being discharged.

Returning to Philadelphia, he married Helen Hooven in 1867. They lived with her mother, and Joseph became a printer for most of his career. Their only child was born in 1879 but died at just four months from measles.

The couple remained childless for the rest of their 39 years together. Helen died of kidney disease in 1906. Three years later, Joseph remarried and moved to West Deptford, New Jersey, where he set up a shoemaker’s shop in his home. Second wife Edith died in 1911 and just seven months later Joseph succumbed to bladder cancer. He was buried with both spouses and his only child.