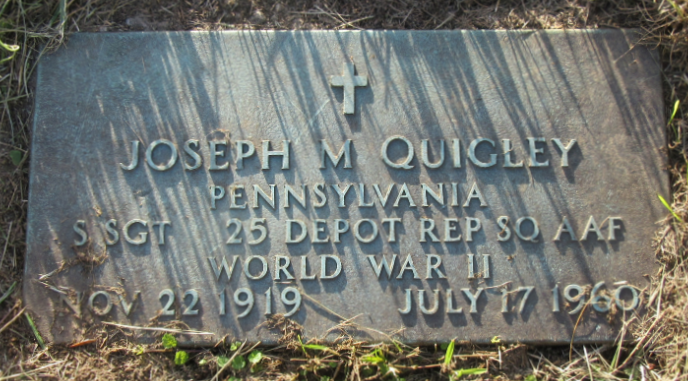 An immigrant from Northern Ireland named Patrick Quigley became a storekeeper in Philadelphia and raised three children. One of them was Joseph’s father, named Joseph Patrick Quigley, and Joseph was one of his six children growing up in the Point Breeze section.

The oldest was John, who was three years older than young Joseph, and both left school before the ninth grade. Joseph was working at Snellenburg’s Department Store cutting rugs when he registered for the draft in 1941. Both boys enlisted in July, 1942 and left in February, 1946, but while John spent nearly three years overseas, Joseph was stateside for nearly three years, becoming a staff sergeant in the Army Air Corps. He was with the 25th Depot Repair Squadron, which performed inspection, maintenance, repair, and reclamation of aircraft, based either in Texas or Utah.

A Florida census in early 1945 shows he married a fellow sergeant, Helen Mary Norton, and they were living in Hillsborough County. 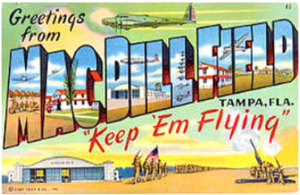 They were probably based at MacDill Field (now MacDill Air Force Base), since that’s where a contingent of Women’s Army Corps troops arrived in 1943. The couple had their first son in 1946 shortly after they were discharged.

Joseph and Helen returned to civilian life in early 1946 in her hometown of North Providence, Rhode Island. The 1950 census says two children were born there, and one source claims they had three more. He was a cloth estimator at a textile firm.

At some point in the 1950s the family moved to Philadelphia where Joseph was a machinist. He was only 40 when he died in 1960. The primary cause of death was pneumonia, but contributing factors were listed as “post-traumatic epilepsy and chronic alcoholism.”

Joseph Sr. also died in 1960, just 46 days later. He and his wife, along with two of their children, John and Helen, are buried here in Section K, Range 13, Lot 46. The youngest sister, Susan, was buried beside the younger Joseph in Lot 45. His wife Helen remarried and was buried in 2003 in Rhode Island.