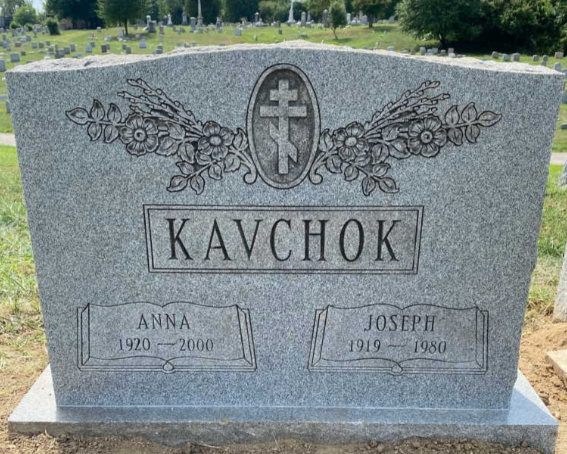 Joseph was one of seven boys and two girls of Eastern European immigrants. His father anglicized his name from Mickial Kavcsak to Michael, but on some records his surname became Kavchok, Kavchak, or Kovcsok, although it was always pronounced the same way. No one variation was preferred by all the children, so the different spellings have passed through the generations.

For at least a half-century, Michael and wife Julia made their home at 2813 Winton Street in the far southwest corner of the Point Breeze section, a neighborhood almost entirely populated by Slovaks and other eastern European ethnic groups. In the heart of that neighborhood, at 28th and Snyder Ave, rose up The Assumption of the Holy Virgin Russian Orthodox Church. Michael was a founding member and secretary of the first parish council in 1913, and the church still serves the community today.

The 1930 census shows almost everyone on Winton and Cantrell Streets had parents born in either Czechoslovakia or Lithuania. Most of the occupations listed were oil and gas workers since they lived within walking distance of Atlantic Refining Company on the Schuylkill River. Michael found work as a boilermaker at the nearby Philadelphia Gas Works.

Joseph graduated from South Philadelphia High School and was a chipper in a steel mill, according to the 1940 census. Registering for the draft later that year he listed his employer as Crucible Steel Casting Company in Lansdowne, Delaware County. All that is known of his service is that he entered the Army October 3, 1942 as a private in the Ordnance Department and left December 6, 1945, spending the last two years overseas. Perhaps he was a driver, transporting weapons and ammunition to where it was needed.

Like so many GIs after coming home, it wasn’t long before Joseph found his bride. He married another Czech descendent, Anna Mae Bubin, and raised a girl and a boy at their home on Point Breeze Avenue. The 1950 census lists his occupation as paraffin presser at Atlantic Refining Company, from which he apparently retired. His funeral in 1980 was held at the same church his father helped establish, and it was no doubt where he was baptized as an infant and later married. 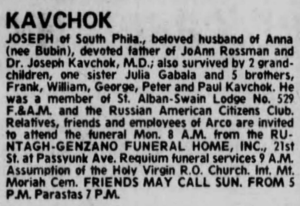 Joseph’s parents were buried in Section G, Range 15, Lot 2 at Mount Moriah. Joseph, his brother Paul, and their wives are in Section D, Range 8, Lot 6, and three other siblings have plots in other sections.