John grew up in Elmwood Park, just south of Mount Moriah, with seven siblings, and was known by them as Jackie. Most documents show 1925 as his year of birth but on the family gravestone and on a few military records it says 1926. On the day he turned 18 he registered for the draft, and was working for Baldwin Locomotive in nearby Eddystone.

John was inducted three months later. He went overseas with the 80th Infantry Division that landed on Utah Beach in France in August 1944, two months after D-Day. They took part in the Third Army dash across France, under General George Patton. Private Daley was small in stature – 5’3” and 120 pounds – but was large in courage, having to endure the snow and bitter temperatures later that year.

Germany launched its last major offensive of the war, the Battle of the Bulge in December and January. As the German army retreated, the 80th Division fought its way across the tiny country of Luxembourg and was about to cross the Sauer River into Germany when John was killed on February 10, 1945. His two older brothers, Robert and James, were also drafted but survived the war and returned home. 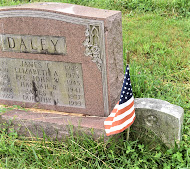 John’s body was buried here in August 1948. There is a small military headstone for 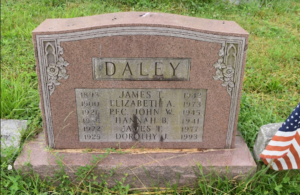 him just to the right of the family stone. John’s name  is the third one on that stone beneath his parents, James and Elizabeth. Beneath his name is his sister Hannah, and his brother James and his wife Dorothy. Their son John, who was named in honor of his uncle John, served in the Navy from 1975-77, and he has a military headstone to the left of the family headstone.