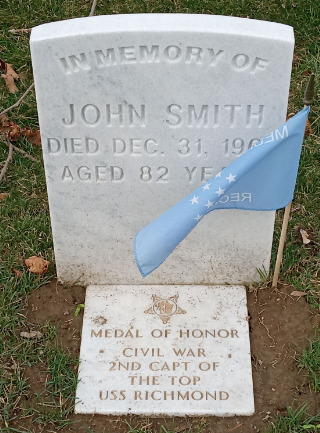 His is one of the most common names in American culture, a name belonging to four different Medal of Honor winners, three of whom were in the Navy. But this veteran distinguished himself as a seaman for 37 years. Born in Albany, New York, his life revolved around the Navy from the time he first enlisted in 1845 until he left the seaman’s life for good in 1882. He made his home in Philadelphia, living the single man’s life for another quarter-century at the US Naval Home.

John served on at least 12 different vessels throughout his career. In the Civil War, he was on board the USS Varuna when she was sunk by Confederate ships after having passed Forts Jackson and St. Philip in Louisiana. He was transferred to the USS Brooklyn in action against Confederate batteries below Vicksburg, then joined the USS Richmond in September, 1863 as a Gunners Mate and then a Quarter Gunner. It was on this ship eleven months later where his efforts won him the Medal of Honor.

John’s citation reads: “The President of the United States of America, in the name of Congress, takes pleasure in presenting the Medal of Honor to Second Captain of the Top John Smith, United States Navy, for extraordinary 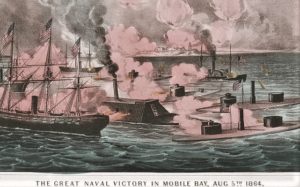 heroism in action, serving as Captain of a gun on board the U.S.S. Richmond during action against rebel forts and gunboats and with the ram Tennessee in Mobile Bay, Alabama, 5 August 1864. Despite damage to his ship and the loss of several men on board as enemy fire raked her decks, Second Captain of the Top Smith fought his gun with skill and courage throughout a furious two-hour battle which resulted in the surrender of the rebel ram Tennessee and in the damaging and destruction of batteries at Fort Morgan.” (War Department, General Orders No. 45, December 31, 1864)

While stationed on the receiving ship, the USS Colorado, in December of 1881, John was admitted to the New York Naval Hospital with heart palpitations. About a month later he was transferred to Philadelphia and discharged to the Naval Asylum. He was 81 years old when he died of peritonitis in Philadelphia on the last day of 1907.

Ironically, of the four John Smiths to receive the Medal of Honor, two were in the Civil War, both were in the Navy, and they were both given the award for their action in the same battle at Mobile Bay. The other sailor John Smith was on the USS Lackawanna.