John was an early Christmas gift to the Leonard family in 1895, born on December 24. Like his father, his name is a tribute to his father’s uncle, Civil War Sgt. John Love. His father was a lifelong textile worker and, as a teenager in the Melrose neighborhood of South Philadelphia, John and his older brother William worked as helpers in a mill. He also had a younger brother, Charles.

In 1914 John was working as a chauffeur when he and his brothers lost their father to chronic kidney disease. William joined the National Guard in April, 1915 and John did the same on March 10, 1916, joining William in Company E of the 3rd Pennsylvania Infantry.

Five days later, Gen. John J. Pershing led American soldiers into Mexican territory in retaliation for a raid by Gen. Francisco “Pancho” Villa. Increasing clashes led to a real threat of war, so on June 18, 1916, President Wilson called on each state to mobilize the National Guard to deal with the problem. As the Leonard boys went to El Paso, Texas to train, Mexican President Carranza backed down, releasing a group of captured soldiers and sending a note of apology on July 4.

The Guardsmen were gradually drawn down and given the Mexican Service Medal. For the Leonards, the encampment in Texas was good preparation for what was to come. William remained in Company E but John began training on the latest weapon of war when he became a corporal in the infantry’s new Machine Gun Company.

The 3rd became one of the base regiments of the 28th Division, designated as the 110th Infantry Regiment when the Leonards returned to active service in March, 1917. Their brother Charles registered for the draft but there’s no record of him ever serving. Both William and John deployed overseas on May 3, 1918. They were in the Meuse-Argonne Offensive that ended the war, and they were both discharged at Fort Dix, New Jersey on May 23, 1919.

John returned to the life of a chauffeur, working for Ajax Metals. He got married in 1925 and had a daughter that same year. His occupation listed in the 1940 census was a chauffeur for Atlantic 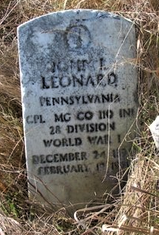 Refining Company, and ten years later he was a janitor/watchman looking for another job.

John died of heart disease on February 19, 1951, at home in Sharon Hill, just a couple of miles west of Mount Moriah. He was given a military headstone and was buried with his parents.