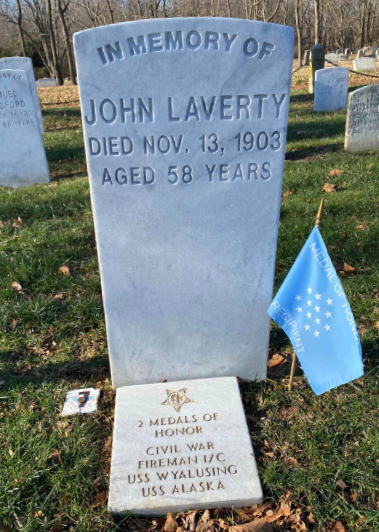 There are more than 3400 Medal of Honor winners, but John is one of only 19 who have won the award on two separate occasions. He is also one of 204 who were recognized for actions outside a combat zone.

His family came to Philadelphia from County Tyrone, Ireland just after John was born on June 19, 1845, although the citation for his first medal award lists his birth in 1842 in New York City. He became a naturalized citizen and joined the Navy on November 26, 1862. He served as a fireman under the name John Lafferty during the Civil War and then reverted to his given name.

During his first tour the medal was given for “extraordinary heroism in action while serving on board the U.S.S. Wyalusing. Fireman Lafferty participated in a plan to destroy the rebel ram Albemarle in Roanoke River, North Carolina, 25 May 1864. Volunteering for the hazardous mission, Fireman Lafferty participated in the transfer of two torpedoes across an island swamp and then served as sentry to keep guard of clothes and arms left by other members of the party. After being rejoined by others of the party who had been discovered before the plan could be completed, Lafferty succeeded in returning to the mothership after spending 24 hours of discomfort in the rain and swamp.” He and four others received their medals on December 31, 1864.

John made the Navy his career and earned his second award while aboard the USS Alaska at Callao Bay, Peru on September 13, 1881. The Alaska was a wooden-hulled vessel, and a fire  could lead to certain disaster. A stop-valve chamber had caught fire in the boiler room. As Fireman First Class, he moved quickly to extinguish the flames, risking death by both fire and overwhelming steam. He and Edward Barrett, another fireman who was also from Philadelphia, received the Medal of Honor on October 18, 1884.

In 1889 John was on the USS Yorktown when he was admitted to the New York Naval Hospital, taking a month to recover from vertigo. He retired on his pension on December 22, 1896 and lived at the Naval Home in Philadelphia until he died November 13, 1903 of an aortic aneurysm.