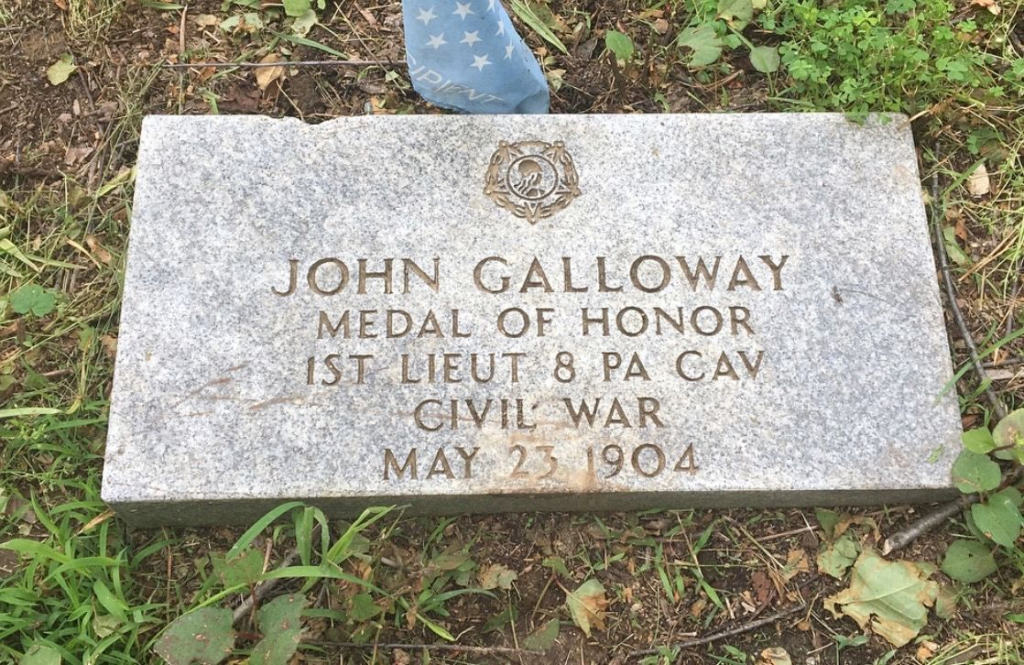 John was the older brother of George Galloway, another Medal of Honor recipient whose grave is adjacent to his. He was born in December 1842, and prior to his enlistment in 1861 he was a butcher. 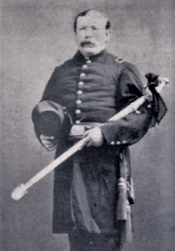 He served in Company H of the 8th Pennsylvania Cavalry and reenlisted December 31, 1863.

John’s rank was changed to Commissary Sergeant January 1, 1865 when he was transferred to Company S. Perhaps his experience as a butcher led to working with food preparation, but his story shows that while commissary staff were well removed from the front lines of battle, they still served as soldiers when necessary. In John’s case, that’s exactly what happened as Union troops pursued the Confederates retreating from Richmond and Petersburg, Virginia. John’s moment of glory came two days before Lee’s surrender to Grant in Appomattox on April 9, 1865.

The citation given with John’s Medal of Honor reads: “The President of the United States of America, in the name of Congress, takes pleasure in presenting the Medal of Honor to Commissary Sergeant John Galloway, United States Army, for extraordinary heroism on 7 April 1865, while serving with 8th Pennsylvania Cavalry, in action at Farmville, Virginia. His regiment being surprised and nearly overwhelmed, Commissary Sergeant Galloway dashed forward under a heavy fire, reached the right of the regiment, where the danger was greatest, rallied the men and prevented a disaster that was imminent.” His Medal was issued on October 30, 1897.

Returning to Philadelphia, John married Margaret Crowley in 1867, had eleven children, became a tavern keeper by 1880 and an art dealer by 1900. His death on May 23, 1904 came just three months after that of his brother George. Also buried at Mount Moriah are three of his children, one of whom was named after his uncle George. This is John’s obituary: