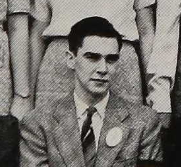 John was born in Connellsville Pennsylvania, near Pittsburgh, but grew up just south of here in Elmwood Park. He walked to John Bartram High School (shown here as a student) and his father was a machinist who walked to work at the huge General Electric facility in the next block. The plant made switches and circuit breakers, and kept many residents of this area employed during the Great Depression. In fact, there were six other machinists living on John’s street in 1930 that all worked at GE, which, at its peak, employed 7500 people.

John might have had his father’s talent with machinery, and since he grew up so close to the airport, that might explain his aeronautical career. John signed up with the Army Air Corps after graduating high school in 1943, training to be part of the 482nd Bomb Squadron. In early 1944 three other squadrons combined with his to form the 505th Bombardment Group. Just before they deployed to the Pacific, he married Mabel Crowell on February 24, 1945, in Oklahoma City, Oklahoma.

Sergeant Duckworth was the central gunner on a B-29 Superfortress aircraft nicknamed “Peachy” when they entered combat a short time later. His squadron took part in air raids that supported the Allied assault on Okinawa in April. They flew long range missions over Japan, bombing military and industrial targets, and were especially effective in 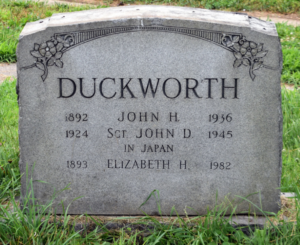 On May 25, the last night of the Tokyo raids, 26 B-29s were shot down, and John’s was one of them. All 11 crewmen died and were listed as missing in action until after the war. His body was recovered and buried in Section B, Range 1, Lot 6, along with his parents.