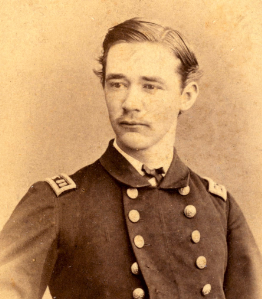 John was born in Delaware to John A. Rowland of Pennsylvania and Margaret Cameron of Maryland. At the time, his father was a medical doctor in rural Chester County, but by 1860 he gave up his practice to be a government clerk in Washington, D.C. The family would add three daughters, although two died in childhood.

John C. was 19 when he went to Philadelphia to enlist with Company K of the 192nd Regiment of Pennsylvania Volunteers to serve a term of 100 days. He only lasted 10 days before deserting. Apparently somewhere along the way he learned the craft of stenography and used that skill to become a clerk back in Washington, D.C. in the Attorney 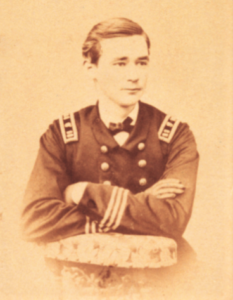 He accepted a position on April 23, 1865 as clerk to Rear Admiral Louis M. Goldsborough, former commander of the North Atlantic Blockading Squadron. The Admiral had just been  appointed commander of the European Squadron, headquartered in Nice, France, on the Mediterranean Sea, and this is where John had these portraits made. While there, he was promoted to Admiral’s secretary and given the rank of Lieutenant.

After his Naval service ended in August, 1867, John C. was asked to fill in for his father as a clerk in the Attorney General’s office while John A. was on an extended sick leave. The 1870 census says John’s job was “clerk at Capitol,” living with his parents, his sister Laura, five boarders who were also clerks, and a live-in servant. In 1873 he married a girl who lived across the street and clerked at the Treasury Department. They lived there with her mother and welcomed a son, John B. Rowland, in 1877. His wife met her untimely death in 1879.

By this time John was working as private secretary to the Surgeon General of the Marine Hospital Service. He found another wife in 1883, but there were health issues due to a botched operation on his heel and broken wrist. Being crippled led to domestic problems. In 1900 he was at a boarding house in Bethesda, MD and filed for divorce in 1901, citing desertion and infidelity. John A. died in 1897 and John B. had just left to marry an actress and moved to New York, only to die there in 1908.

The rest of the now-single man’s life is unknown except for his move to the Philadelphia Naval Hospital where he died, just shy of his 77th year. The cause of death was listed as senile psychosis.