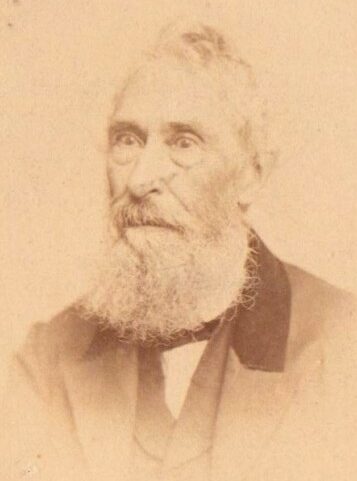 John C.B. Standbridge was born in England and emigrated with his family to the United States as a child, settling in Philadelphia. In January of 1828 he married Eleanora Gowing while he studied medicine at the University of Pennsylvania. Five children were born to them: Eleanor (1829), John (1833), Fanny (1835), Henry (1837), and George (1842). It wasn’t long before music, not medicine, became his passion.

John was hired as an organist for various prestigious churches in Philadelphia. After accepting the organist position at Old Christ Church, he devoted himself solely to music. He studied, taught and composed music, mostly hymns. In 1840 he began building organs, eventually building a factory in the 2200 block of Chestnut Street to accommodate the large number of orders he received.

Still, in the 1850 census he listed his occupation as music teacher. Sons John and George eventually joined him in the organ business and through the years the Standbridge name earned a reputation for excellence. John was considered a perfectionist, not allowing an instrument to leave his shop if it did not meet his standards.

His organs were installed in over 40 churches in the city plus many states, including St. Brigid Roman Catholic Church in New York. Among the finest in Philadelphia were his organs at St. Clement’s Episcopal, Calvary Presbyterian, Old Pine Street Presbyterian, Rodeph Shalom Congregation, and the Cathedral Basilica of Saints Peter and Paul at 1723 Race Street. That organ cost $10,000 when it was dedicated in 1868. It was that same year

One of John’s last organs was completed and installed at Arch Street United Methodist Church in 1871. The magnificent instrument had 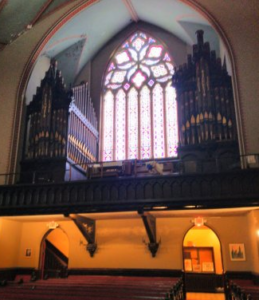 more that 2,300 pipes, and has since been rebuilt, renovated, enlarged and electrified. In May of that year a series of concerts by widely known organists were held to showcase the new organ.

On December 7, 1871 a testimonial concert at the Arch Street church was performed in John’s honor, and the choir sang one of the hymns he composed. The timing of this testimonial proved serendipitous as Mr. Standbridge died of meningitis just 8 days later on December 15. It was just one month prior that his son John had passed away. The family plot at Mount Moriah would eventually include his wife and other family members. 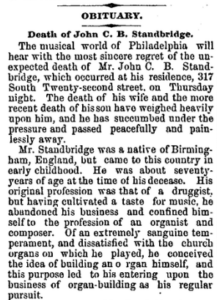 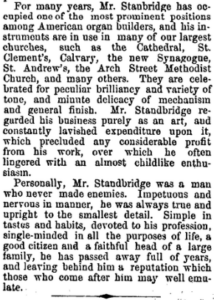 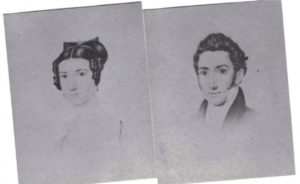