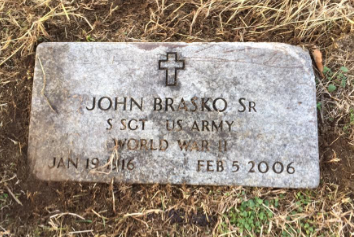 The fourth of five boys, John was one of three in the military and the second in the Army Air Corps. His parents, William and Mary, came to Philadelphia at the turn of the century from Eastern Europe, listing their birthplace interchangeably as either Austria, Hungary, or Czechoslovakia.

They raised their boys, Andrew, William, Michael, John, and Joseph, at 2841 Winton Street in the West Passyunk neighborhood where William would walk to his work as a boilermaker at the Atlantic Oil Refinery. Just up the block at 28th and Snyder Ave. was The Assumption of the Holy Virgin Russian Orthodox Church, which served as the focal point of this tightly knit ethnic community.

William submitted his “Petition for Naturalization” in 1919, witnessed by a man who was most likely his cousin, John Brasko. [Read his “Notables” story in the Spanish American War category.] William was born 1882, seven years after John and immigrated in 1903, 12 years after John, but since their fathers do not share the same first name, they’re not brothers. Sometime in the 1920s William bought his first home at 2840 Snyder Avenue, a few doors west of John’s house at 2818 Snyder. It’s probably not coincidental that one of John’s sons was named William (father of William Jr) and one of William’s sons was named John (father of John Jr).

After the birth of this John came Joseph in 1924, and with the Depression a few years later, the three older boys were all working, while their father held onto his job at the refinery. When the war in Europe escalated, John watched as his brother Andrew enlisted on February 11, 1941. On Saturday, December 6, 1941, he did the same, not knowing the next day would bring shocking news from a Hawaiian naval base called Pearl Harbor. 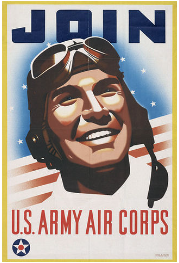 While Andrew spent nearly five years in the Army Air Corps, he never left American soil. John was stateside for close to two and a half years before the Air Corps took him to the China/Burma/India Theater, where he was a staff sergeant from April 1944-November 1945. The Brasko boys were not big, which may have given them an advantage in airplanes; both were 5’7” and 120 pounds. Their younger brother Joseph weighed the same but was an inch taller when he joined the regular Army right out of high school. He went with the 29th Division on the D-Day invasion, and was wounded a few weeks later in Normandy.

John worked after the war as a meter mechanic at Philadelphia Gas Works. He married Edna May Conly in 1949, they had one son, John Jr., and they later lived in Maple Shade, New Jersey. Edna died in 1982 and John followed 24 years later, just two weeks shy of his 90th birthday. They are both buried in Section D, while John’s parents and brother Michael are in Section C, Range 5, Lot 3.