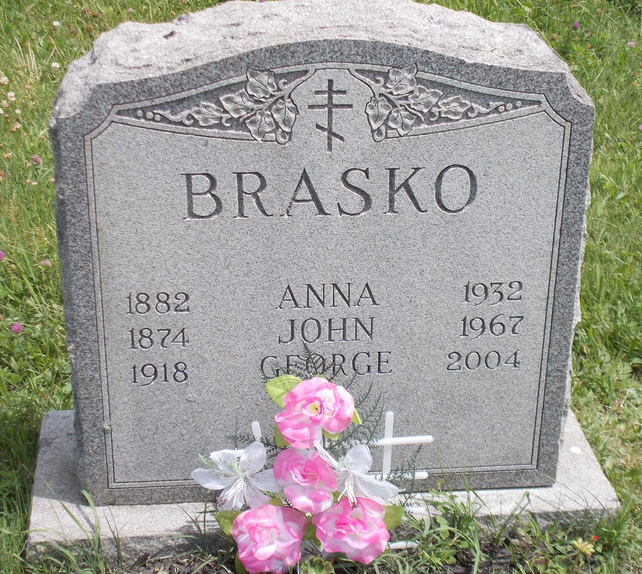 Assimilation is not easy for some immigrants, but others adapt quickly to a new culture and language, especially young people like John Brasko, who arrived in Philadelphia when he was 17. His birthplace was known at the time as the Austria-Hungary Empire, although he may have been from today’s Slovakia. Documents show his parents were John and Anastia Brasko, but whether he made the journey with them is unknown.

Young John promptly settled in a predominately Slovak part of the Point Breeze section, near the Schuylkill River. His address was 2515 Point Breeze Place when he joined the Marines in April, 1899, serving five years. War with Spain was declared in April, 1898, fighting ended in August, and a peace treaty was signed in December, but rebellion in the Philippines continued through 1902. Since John enlisted after 1898 and did not serve in actions in China or the Philippines, he didn’t qualify for pension benefits. His term of service was spent in San Juan, Puerto Rico.

1904 was an important year in John’s life. He was discharged April 23, became a naturalized citizen May 2, and got married October 28 to Anna Dirbas, a 22-year-old fellow Slovakian who immigrated the year before. They made their home in their ethnically-dominated neighborhood at the southern tip of 28th St. where John William was born in 1906. John worked for the next several decades as a janitor. By their tenth wedding anniversary they moved to 2818 Snyder Ave. and Annie had four children but only John William survived.

The Assumption of the Holy Virgin Russian Orthodox Church was organized in 1913, just a few doors away at the corner of 28th and Snyder, and John was one of the founding trustees. Two more boys were added to the family: William in 1916 and George in 1918. The 1920 census shows the home included the three sons plus three single young men as boarders, working at the nearby gas works and oil refinery.

The Braskos welcomed their final child, Anna, in 1923. At the next census their address remained the same, John was a janitor at the Post Office, and John William just graduated from Drexel Institute in 1930. He became a mechanical engineer at Atlantic Refining Company, located within walking distance at 28th & Passyunk Ave. He married later that year, climbed the corporate ladder to become a buyer in Atlantic’s headquarters in Center City, moved to Drexel Hill in Delaware County, and had two daughters.

By 1940, William was also married with one daughter, living three doors away from his parents at 2812 Snyder Avenue, and was a tester at Atlantic Refining. There’s no record of military service for either him or his brother John. He had another daughter and son, and apparently remained at the same home the rest of his life. He was one of the more recent burials here (location not found), in 2009, joining wife Julia (2004) and son William (2005).

John lost his wife in 1932 due to heart failure at age 49, but married another Slovakian, Julia Masznik, who was about the same age, in 1933. Like her brothers, Anna graduated from South Philadelphia High School, and she went on to graduate from Temple University’s School of Medicine in 1943. She joined the Nurse Corps in 1945 and served two years at Naval hospitals in Brooklyn and San Diego. George also served his country, was buried with his parents, and has his own Notables story in the World War II category.

John’s health declined by 1950 when he was 75, since he was listed in that census at the Philadelphia Naval Home. He died there in 1967 of heart disease.