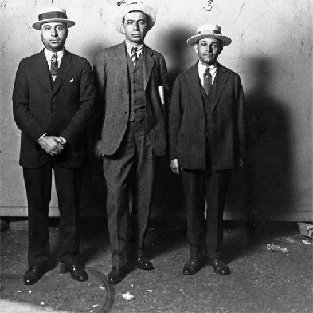 John Avena was once known as “the biggest numbers man in South Philadelphia”. Born in Sicily about 1893, John succeeded Salvatore Sabella as Philadelphia’s mob boss in the early 1930’s. It is believed that Sabella, the founding boss of Philadelphia’s crime family, personally chose Avena as his successor and fully supported his leadership. In addition to the numbers racket, Avena was alleged to be involved in drug dealing, extortion and operating two high-stakes gambling establishments in his neighborhood which was known as “Bloody Angle”. Named after the location of a famous Gettysburg battle, the section of the City on Passyunk Avenue between Christian and Washington Streets was Avena’s home ground. He claimed to have “friends” at 7th and Carpenter. Now the location of the Charles Santore branch of the Philadelphia Free Library, in Avena’s time it was home to the local police station.

On August 17, 1936, while standing on the corner of Passyunk and Washington Avenues, Avena along with one of his top aides, Martin Feldstein, was gunned down. The multiple shots were fired from the rear window of a moving vehicle. Reports indicated that the hit was ordered by the Lanzetti Brothers (most of whom were named after Catholic Popes), members of a rival gang within the warring Philadelphia family. Although there were two witnesses on the street at the time of the shooting, they were not able to identify the gunmen. Avena was the first mob boss to be killed in Philadelphia. His Pennsylvania death certificate gives a detailed account of his death. John was survived by his widow, Grazia/Grace and 1 son. He did not have a will, but his wife received his estate valued at $5,500 and included a diamond wrist watch.

An estimated 500 people assembled at John’s home on 15th Street the day of his funeral. Many were drawn not by their connection to Avena, but by the notoriety of the deceased and his associates, many of whom were well known to the Philadelphia police. Curiosity also attracted others amid rumors that he was being buried in a $10,000 casket. Neighbors denied that, stating that the cost was closer to $3,500. However, those viewing the casket reported it was bronze with ornate decorations and that parts of it glistened leading to speculation that it was adorned with gold. Following a service at St. Elizabeth’s Episcopal Church, 50 cars, at least two piled high with flowers, led mourners to Mount Moriah Cemetery for the burial.

Avena was originally buried in Section E. He was removed from Mount Moriah in the 1970s and reburied in New Jersey.