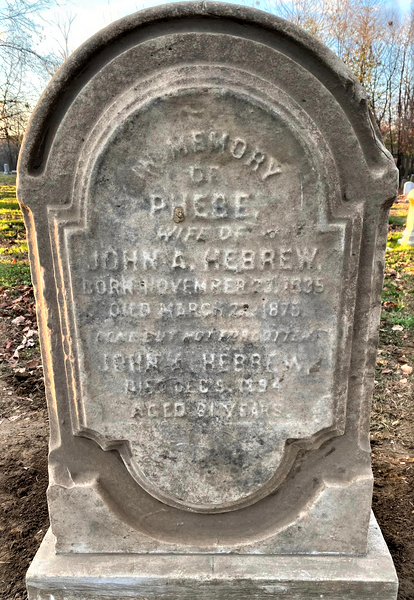 The Hebrew family was Presbyterian, arriving from Northern Ireland in 1848. Their children included one girl with two older and two younger brothers. Their father, James, was a sexton, one who performs custodial and caretaking duties in a church. While information on most women of the era is limited to “keeping house,” Jane Hebrew became an entrepreneur by 1860, when her occupation was “china storekeeper.” Fortunately her children were older by then.

There was no job listed under John’s name in the 1850 census, but by mid-decade he was in bookkeeping, had married Phebe Ann Thompson, and they lived in the Forgotten Bottom neighborhood of Philadelphia. Their first child was born in 1857, but he died from cholera at two months of age. Their second, John Jr., was born the following year, and their third in May of 1861. 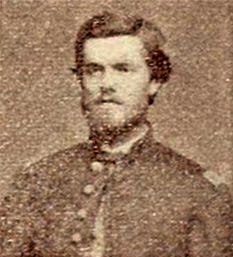 Then, duty to country called, and John enlisted as a sergeant with Company C of the 99th Pennsylvania Infantry that August. He soon became a 1st Lieutenant, then transferred to Company G as captain, and witnessed all the campaigns of the Army of the Potomac from the Second Battle of Bull Run to the Battle of the Wilderness and Spotsylvania Court House until his enlistment expired in September, 1864.

John resumed domestic life by welcoming his first daughter in 1866 and a second in 1868. The family resided in Norfolk, Virginia in 1870 where John worked as a bookkeeper at an orphanage for girls. By 1873 John found his last job, as a clerk in the Office of the Comptroller of the Currency in the Treasury Department in Washington, D.C.

When Phebe died in 1875, John buried her at Mount Moriah in Section 204, Lot 164. His children still needed a mother so he found Ida King to fill that role and married her two years later. Over the next five years, both of his parents died, and they were buried in Section 204, Lot 165, along with his sister.

Ida died in 1889, and John likely worked up to his time of death in 1894. Both of them were buried here beside Phebe. Two of John’s brothers, who died the year before and the year after him, are also in this same section.