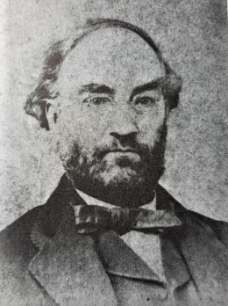 Jearum Atkins is not a household name like that of Thomas Edison and Henry Ford. However, he was responsible for important, incremental improvements in engineering technology during the Industrial Revolution. One reason for his lack of fame is that he sold the rights to his most potentially profitable invention. In 1852, Jearum perfected the design of the McCormick reaper so it not only cut grain but raked it so it could be bundled. Cyrus McCormick bought the rights to the self-raking harvester and became famous.

A small granite square monument marks Jearum’s’ grave on the Yeadon side of Mount Moriah. The inscriptions on all four sides of the marker list some of his patented inventions and the patent award dates:

Jearum lived during the Industrial Revolution, when machines were invented to replace manual labor and automate as many processes as possible. Yet he had little formal schooling as he grew up in Waterbury, Vermont, where his father ran a water-powered sawmill. That may have fueled his imagination for mechanical devices. At age 25, while living in Chicago he suffered spinal injuries from a runaway horse. He spent many years recovering, but used that time to imagine and invent. 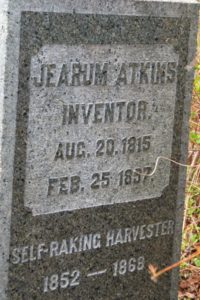 One publication described him as “one of the most remarkable men ever born in this country,” which nature endowed with “a phenomenal capacity for mathematical and physical inquiry” (Cassier’s Magazine, Vol. 5, 1893-4). In 1855 he received the Franklin Institute Award  for what he called his “Automaton” harvester. Yet his fame and fortune often waxed and waned.  Other harvester models came on the market by 1860 that worked even better and rendered his creation useless.

His original inventions did not fare as well as his improvements on other people’s work. The hydraulic steering apparatus improved the design of the steering mechanism of steam ships. Jearum’s caliper patent was a simple improvement on the mechanical measurement caliper. His smoke stack design for steam locomotives improved the efficiency of the exhaust of steam. The safety valve regulator for steam boilers allowed high-pressure steam to vent and prevent the boiler from exploding. Accidental explosions in locomotives and steamships occurred all too often. Mark Twain’s younger brother was killed in 1858 when the boiler blew on the paddlewheel steamboat on which he was a passenger.

Considering the contributions of Jearum Atkins to engineering design, it’s noteworthy that many original inventions are not revolutionary, and may get brushed aside by newer and better inventions. Sometimes they are merely springboards for further development and improvement, often by people other than the original inventor. Some accounts say Jearum often remarked that he was born to misfortune. It’s believed he never married and suffered a stroke and some vision loss as he spent the last of his years in Philadelphia. 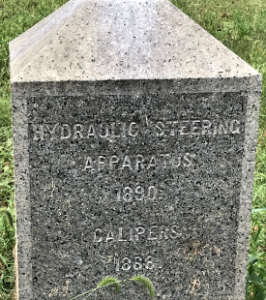 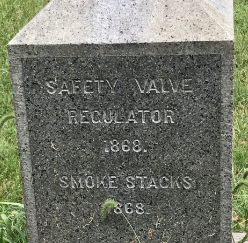 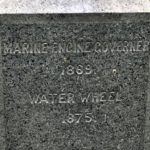