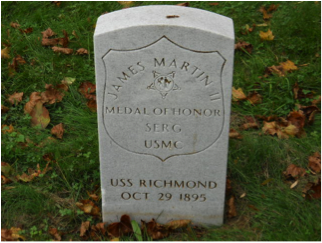 James was born in County Derry, Ireland but his early years, including his date and place of emigration remain a mystery. He felt called to serve his new country at age 20 when he joined the Army in July 1847. As part of Company K of the 3rd Field Artillery Regiment he was in several campaigns during the Mexican War before it came to an end in February, 1848, and he was discharged in August.

The next event in his timeline was joining the Marines during the Civil War although it’s not known when he signed up. Nor is it known when he was assigned to the USS Richmond. The steam sloop had just been built in 1860 and joined in the blockade of the mouth of the Mississippi in 1862. Sergeant Martin was on board the Richmond when it did the same in Mobile Bay, Alabama in 1864. His citation is as follows:

“The President of the United States of America, in the name of Congress, takes pleasure in presenting the Medal of Honor to Sergeant James Martin, United States Marine Corps, for extraordinary heroism in action as captain of a gun on board the U.S.S. Richmond during action against rebel forts and gunboats and with the ram Tennessee in Mobile Bay, 5 August 1864. Despite damage to his ship and the loss of several men on board as enemy fire raked her decks, Sergeant Martin fought his gun with skill and courage throughout the furious two-hour battle which resulted in the surrender of the rebel ram Tennessee and in the damaging and destruction of batteries at Fort Morgan.” (War Department, General Orders No. 45, December 31, 1864) 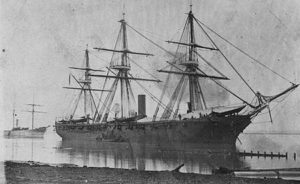 James was one of 29 Richmond crew members to receive this award during the war. After the war he remained single and remained in the Navy. On January 25, 1873, while on liberty, he suffered a fall and was admitted to the Portsmouth, New Hampshire Naval Hospital until discharged back to duty March 11. Two months later he decided to retire and entered the Philadelphia Naval Asylum.

Throughout the 1880s he was admitted to the hospital there on several occasions, mostly for knee pain, rheumatism, and alcoholism. James died of cancer on October 29, 1895 at age 69.