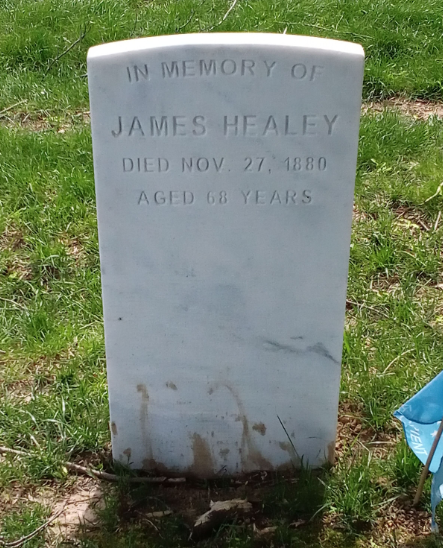 Most sources list the birth year for James as 1812, and his last name was misspelled Haley on his Medal of Honor citation. His family was from County Cork, Ireland, and James probably emigrated in 1850 during the devastating potato famine that forced more than a million people to leave Ireland for a better life in America. He began his 22-year Naval career in 1857.

One of his first tours during the Civil War was with the coastal monitor USS Passaic, one of dozens of ironclads used in blockades of Confederate ports. James may have been on board when President Abraham Lincoln visited the ship in December, 1862, while it was in Washington for repairs.

However, it was while he was on the USS Kearsarge that he and 16 others earned a Medal of Honor. For almost two years a Confederate ship, the CSS Alabama, conducted raids on Union merchant ships, capturing or burning 65 of them off foreign shores like Brazil, South Africa, and India. The Kearsarge caught up with the commerce raider at Cherbourg, France, and fired on it until it was reduced to a sinking wreck. 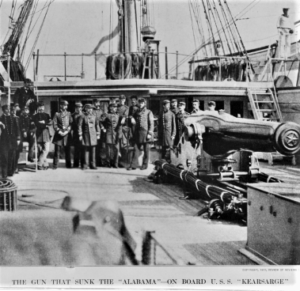 Seaman Healey was recognized for “extraordinary heroism in action, serving as Captain of the Forecastle on board the U.S.S. Kearsarge when she destroyed the Alabama off Cherbourg, France, 19 June 1864. Acting as Captain of a gun during the bitter engagement, Haley [sic] exhibited marked coolness and good conduct and was highly commended by his division officer for his gallantry and meritorious achievement under enemy fire.” (War Department, General Orders No. 45, December 31, 1864)

James received his medal while on board the USS Connecticut on July 27, 1865. In the early 1870s he was on the USS Tallapoosa when it served as a training ship at the US Naval Academy in Annapolis, Maryland. During this tour he was admitted to the Naval Hospital in Washington DC three times, suffering from piles, heart trouble, and alcoholism. His doctor noted, “Patient has, according to his own statement, led a dissipated life, and his present condition is mainly due to that cause.”

Before the end of the decade he was back on the Passaic, now moored at Washington DC and renamed the USRS Passaic, a receiving ship for new recruits before their first assignment.

In early 1879 he returned to the Naval Hospital, suffering from cephalalgia, a chronic headache. James applied for a discharge on May 10 and became a resident of the US Naval Home in Philadelphia May 31. He was admitted that day to the hospital there, with his condition listed as “facial paralysis.” He remained hospitalized until his death eighteen months later, on November 27, 1880.