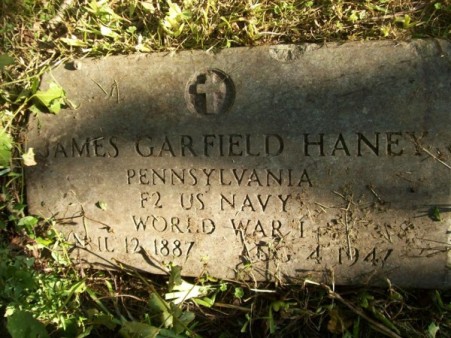 Named after the man who was President for only six months in 1881 before he was assassinated, this future sailor was born six years later, and three years before his only sibling, Richard. The Haneys lived in the Point Breeze section of Philadelphia where Mr. Haney worked at the Gas Works and Mrs. Haney actually had given birth to five children but only two survived.

In his early 20s James worked as a driver while looking for his future career. He thought it would be in the Navy, so he enlisted in April, 1911, but he only lasted a year before he received a bad conduct discharge. He returned for another one-year stint from April 1914-April 1915.

When the Selective Service Act became law in 1917, he registered in June and was drafted in August. James became a Fireman, second class (F2) on board the USS Minneapolis. He had to find a new career in April, 1918 because he was once again given a bad conduct discharge.

He returned to civilian life and got married that year, becoming a step-father in the process to his wife’s two adolescent boys. James became a boilermaker at a shipyard in the Fishtown neighborhood of Philadelphia. That was the occupation shown on his World War II draft registration as well as his death certificate in 1947. The cause of death was listed as lung cancer but, from what is now known about asbestos in shipyards, it was most likely mesothelioma.