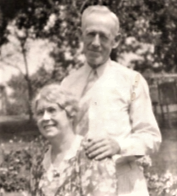 Jim was the tenth of a dozen children parented by Alexander and Martha Craig of Ireland. The youngest was born in 1885, the same year Alexander died. The question to be faced was, “What now?” Two years later Martha and her seven youngest boarded the steamship Lord Clive in Liverpool bound for Philadelphia. Her oldest son, William John Craig and at least one of the other five adult children were already there to meet them. What they did at that point, where and how they lived, is unknown.

Robert was the oldest of the seven new arrivals at 21. He would have been “the man of the house” in little Jimmy’s eyes although he got married and moved out a few years later. The next in line, Eliza, was certainly her mother’s assistant in caring for the children. By 1901, Sam, the youngest child, was 16 when Martha died. The family bought a place for her at Mount Moriah in Section 153, Lot 89.

The ship’s manifest listed the birthplace and “last legal settlement” for each of them as Scotland, although other documents say it was Ireland. Every time Jim listed his parents’ birthplace on a census, that’s what he said too. But as far as he was concerned, he was an American, so he consistently listed his birthplace as Pennsylvania.

War with Spain was declared in 1898 and while it was officially over before year’s end, those in the military during subsequent events are considered Spanish-American war veterans, and Jim became one of them. He joined the Marine Corps as a private on May 24, 1899 and his service abroad started on the USS New Orleans from October, 1899 through July, 1902.

When the peace treaty with Spain was signed, the United States assumed sovereignty over the Philippines, but the rebellion there soon turned against American occupation. Fighting across the Islands lasted from 1899 to 1902, with many more American casualties there than in the brief war with Spain.

The New Orleans was in Philippine waters just as the new century began until late February, 1900. It was here that Jim was wounded and lost his right hand at the wrist.

His ship also took part in the China Relief Expedition in the fall of 1900. A nationalist movement known as the Boxer Rebellion threatened the lives of foreigners, so President William McKinley sent a force of 1100 Marines to help suppress the violence. The New Orleans actually arrived after the hostilities ceased and served from September 14 to October 10, mainly to transport mail and personnel. By the 11th, all Marines had been withdrawn from China.

Jim then spent less than two months with the USS Solace in the summer of 1902. He served his remaining two years at Mare Island Naval Shipyard, northeast of San Francisco, receiving a promotion to Corporal in March, 1903 and again to Sergeant in January, 1904, just before his time was up in May.

After his return to Philadelphia, he met and married a 16 year-old named Ella May King in 1906. They had three boys and a girl before Ella died suddenly of diphtheria in 1914. This is Ella with their first son, Harry. The following year there was a new Mrs. Craig, the former Anna Scott Moore, pictured with him here in their later years. They added another boy and two girls to the family home on South 24th Street.

Jim found the job that defined the rest of his career, that of an “ordinance man,” one who assembles, transports, maintains or stores weapons and ammunition. Initially this was at Fort Mifflin, located at the eastern end of today’s Philadelphia International Airport on Hog 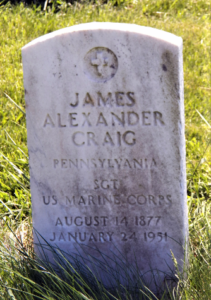 Eventually he transferred to the Frankford Arsenal and the family relocated to Elkins Park in Montgomery County. From that house their youngest son, Bill, joined the Navy and served three years during World War II. And it was in that house that Jim died of heart disease at age 73, later joined by Anna at their plot here at Mount Moriah. His oldest brother, William John Craig, has a family plot in Section F, Range 1, Lot 8.