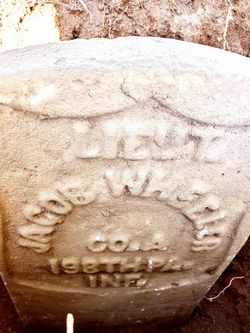 Jacob was named after his grandfather, an immigrant from Switzerland whose original name was Hans Jacob Uller. In 1791, at age 38, Hans married Leah Locke from Rhode Island and they had six children. Four of them lived to be from 79-87 years old. The youngest son, John, was a blacksmith and he passed his trade on to his youngest, Jacob. The 1860 census lists Jacob, age 19, living in Hatboro, Montgomery County, with Joel Miller, a “Master Blacksmith” and his family.

He interrupted his smithing for nine months of brief but eventful service in the Army. He was “mustered in” on  September 5, 1864 as a Sergeant with Company A of the 198th Pennsylvania Infantry. He participated in the Siege of Petersburg throughout the fall and winter months, and his unit was at Appomattox to witness the surrender of General Lee’s troops on April 9, 1865.

On May 23, Jacob was part of a huge parade in Washington, D.C. known as the “Grand Review of the Armies.” General George Meade’s Army of the Potomac marched down Pennsylvania Avenue, 80,000 strong, to the cheers of politicians, the President, and virtually everyone in the District. The next day General Sherman’s 65,000-man Army of Georgia passed in review, and within the next two weeks the Union’s two main armies were both disbanded.

Jacob’s rank was changed to First Lieutenant on May 29 just before his discharge on June 4. He returned to his livelihood but only for five or six years. His last days were spent in an alms house where he was being treated for alcoholism. Two death certificate indices contradict each other on whether he was married. The cause of his death in 1872 was “Mania a potu,” an alcohol intoxication state with violent behavior that goes beyond the panic, shaking, and physical hyperactivity associated with delirium tremens.

Jacob’s father and two of his three sisters were alive when he died and took care of his burial. Although no other family members are here, they made sure his service to his country was honored with a military headstone listing his rank and membership in the 198th.