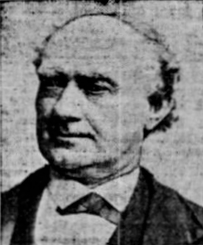 His grandfather Harvey and father Jacob were seamen by trade, so perhaps it’s not a coincidence that Jacob Jr. joined the Navy during the Civil War. They used the term Captain in describing their position in the shipping business, but it was not a term officially given to Jacob’s military service, used only once on a burial form and in his cemetery record.

He had been working as a clerk while living with his parents during the War years. On the day after Valentine’s Day in 1863, Jacob married a girl known as Winnie, but whose legal name was Onida Elmira Chamberlain. He enlisted on October 17 for what would be 18 months aboard the USS Cowslip. As a Master’s Mate, he may have assisted in navigation, docking, and anchoring the ship, and executed the orders of the Master.

The side-wheel steamer had just been built that year and was assigned to the West Coast Blockading Squadron. The Cowslip patrolled the waterways, preventing supplies from arriving at ports in New Orleans, Biloxi, and Mobile. Its crew was responsible for capturing several boats, rescuing crews from damaged and destroyed ships, towing ships out of danger, and delivering ammunition and messages from ship to ship.

After Jacob returned to Philadelphia, it doesn’t appear the maritime life was ever his again. He resumed his occupation as clerk and for many years was a freight agent, while Winnie gave birth to five children. Their oldest, May Teal Zehner, had married but died at age 22 in 1886, and was buried here in Section 107, Lot 52. Two others didn’t survive infancy. The 1910 census reveals Winnie had converted the home to a boarding house, and Jacob was a bookkeeper at a shipyard. That’s about as close to the docks as he had been since his Navy days.

Jacob didn’t forget about his past, however. In his later years he was secretary of the local chapter of the Naval Veterans Association. He died of chronic kidney disease in 1914. Along with his children and his wife, Jacob’s parents and three of his four siblings are with him here in the family plot.