Howard was among the first to attend the new John Bartram High School just a few blocks south of here after it opened in 1939. He was on the football team and lived just a block away, off of Elmwood Avenue, but he may have skipped his high school graduation.

He joined the Army June 1, 1943 and was assigned to Company L in the 15th Infantry, where the future President, Dwight D. Eisenhower, had been a commanding officer a few years earlier. By the time Howard finished basic training, other companies of the 15th had already fought in North Africa.

His company shipped out the day after Thanksgiving. They joined the rest of the infantry in an amphibious landing in Italy that marked the start of the battle of Anzio from January to June, 1944. It was a hard-fought victory but among the members of the 15th Regiment, 16 received the Medal of Honor, including Audie 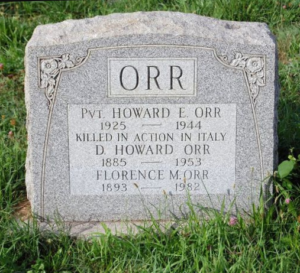 Murphy, the most decorated combat soldier of the war.

Unfortunately there was no such recognition for Private Orr, who died toward the end of the Italian Campaign, on May 23, 1944. Ten days earlier was his 19th birthday. Howard’s funeral and burial was held in August, 1948 and his parents were later buried with him.