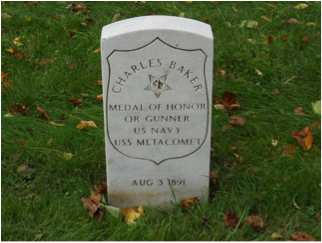 Civil War – Quarter-gunner on board the U. S. S. Metacomet, was one of the boat’s crew which, in charge of Acting Ensign II. C. Neilds of the United States Navy, went to the rescue of the officers and crew of the U. S. monitor Tecumseh, when that vessel was sunk by a torpedo in passing the forts in Mobile Bay, August 5, 1864. This boat’s crew, under their brave and gallant leader, went within a few hundred yards of one of the forts, under a fire which Admiral Farragut expressed as ” one of the most galling” he ever saw, and succeeded in rescuing from death ten of the crew of the Tecumseh. Their conduct elicited the admiration of both friend and foe. (G. O. 71, Jan.15, 1866.)