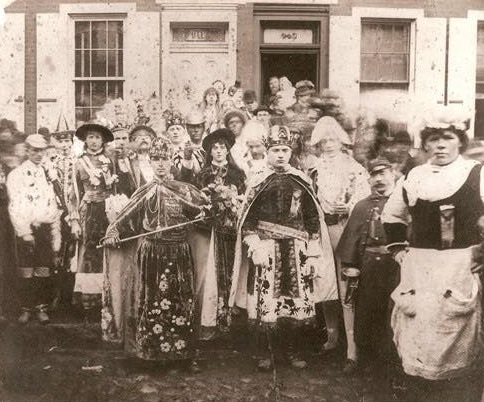 This story was told to me by my Aunt Viola, Georges youngest child.

George Wesley Stroby was born on 23 February 1877 to George B. Stroby and Mary Wilson.  His father was a “Segar maker” and was of Swedish descent.  George was the youngest of 4 children and the only boy.  He was baptized on March 13, 1879 at St John the Evangelist Episcopalian Church in Philadelphia.

He loved music and was instrumental in founding the Trilby String Band (the oldest in Philadelphia) and organizing the Mummers Parade.  He played the Mandolin and along with a physician, Dr. Samuels, a shoe store owner and a musician, the four men are responsible for bringing the city of Philadelphia to life on New Years’ Day every year.   During their lunch breaks, they would meet in the park for a “Jam Session”.  It attracted many others who joined them.  What started out as a contest, quickly became the beginnings of an organized group, The Mummers.

My grandfather was an electrician by trade and worked for the McCahan Sugar Refinery earning $12 a week.  This was during Prohibition, and George built coils used for Bootlegging Whiskey.  He was a “gentle”, quiet man.  He chewed tobacco and bit his fingernails.  He liked candy, movies, and walks. Every Sunday, my aunt and her dad would take the trolley to Mount Moriah to visit his mother and fathers’ graves.  There was no stone, so he built a fence 18 inches tall from wrought iron and engraved a plaque that he attached to the fence. My aunt recalls getting into trouble for playing in the cellar where her dad and brother, who was also a mummer, made and stored Mumbrellas all year.