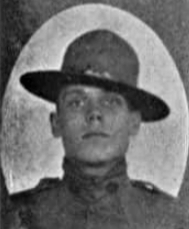 There is more personal information available for George’s family than there is for him, and that’s not very much. He was born on June 24, 1898 in Philadelphia to William and Florence, who also had William Jr in 1903 and Florence in 1908. No census record was found for his family in either 1900 or 1910, and while his father died at age 58, his mother and siblings all lived well into their 80s.

George was a clerk when he entered the service on June 28, 1917, and was part of the 109th Infantry that arrived in France in May, 1918. Private Gosner participated in the Second Battle of the Marne. This was the last major German offensive on their western front, and the Allied counterattack marked the beginning of their retreat, which led to

the end of the war four months later.

The battle lasted from July 14-18 and it was on one of those days that George died. His military record says it was the 15th but the newspaper obituary and his 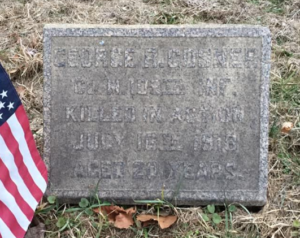 gravestone show July 16th. He was posthumously awarded the Purple Heart and the World War I Victory Medal. His body arrived home three years later, and was buried in Section 102, Lot 298. The adjacent stone marks the burials of George’s parents and his two siblings.