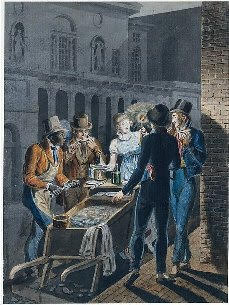 The National Association of Professional Base Ball Players was established in March of 1871.  Baseball would have its first league made up of professional clubs with an established method of determining a champion. The first game in the league’s history was played on May 4, 1871 between the Forest City Club of Cleveland and the Kekiongas of Fort Wayne.

The following month, on June 26, George Ewell, a 20-year-old Philadelphia native, made his first and last appearance as a Forest City player.  In that game, played against the Washington Olympics in Washington, DC, George, a right fielder, had three at bats and no hits. The team fared no better, losing the game before more than 2000 spectators.  Forest City Cleveland finished the season in 8th place (out of 9).  The first place team that year was the Athletics from George’s hometown of Philadelphia.

According to Philadelphia census records and city directories, George spent most of his life working in the oyster business. Between 1850 and 1900, the oyster industry in the Delaware Bay was burgeoning and oyster bars and saloons were plentiful. In 1893 one establishment opened near South Street as an oyster saloon.  It was called Bookbinders, a name that would

remain synonymous with seafood dining in Philadelphia for many years to come.  It was joined by more than 2,400 restaurants, bars, hucksters and street peddlers selling oysters which were cheap, abundant 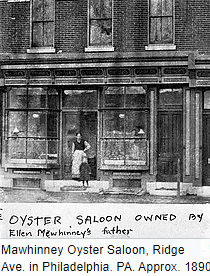 and able to be eaten raw, steamed, cooked in stews or served in soups.  By the early 1900’s, New York, Philadelphia and Baltimore ranked among the top oyster markets in the country.

George was the son of Solomon and Mahala (Martha) Ewell, natives of Virginia, and he had many siblings.  He married Mary Ann Lenoir in 1876, and George joined his father in the oyster business. By 1880 they had two toddlers and were living with his parents, later adding two more children to the family.  He died from kidney disease in 1910, and Mary joined him in the family plot 20 years later.