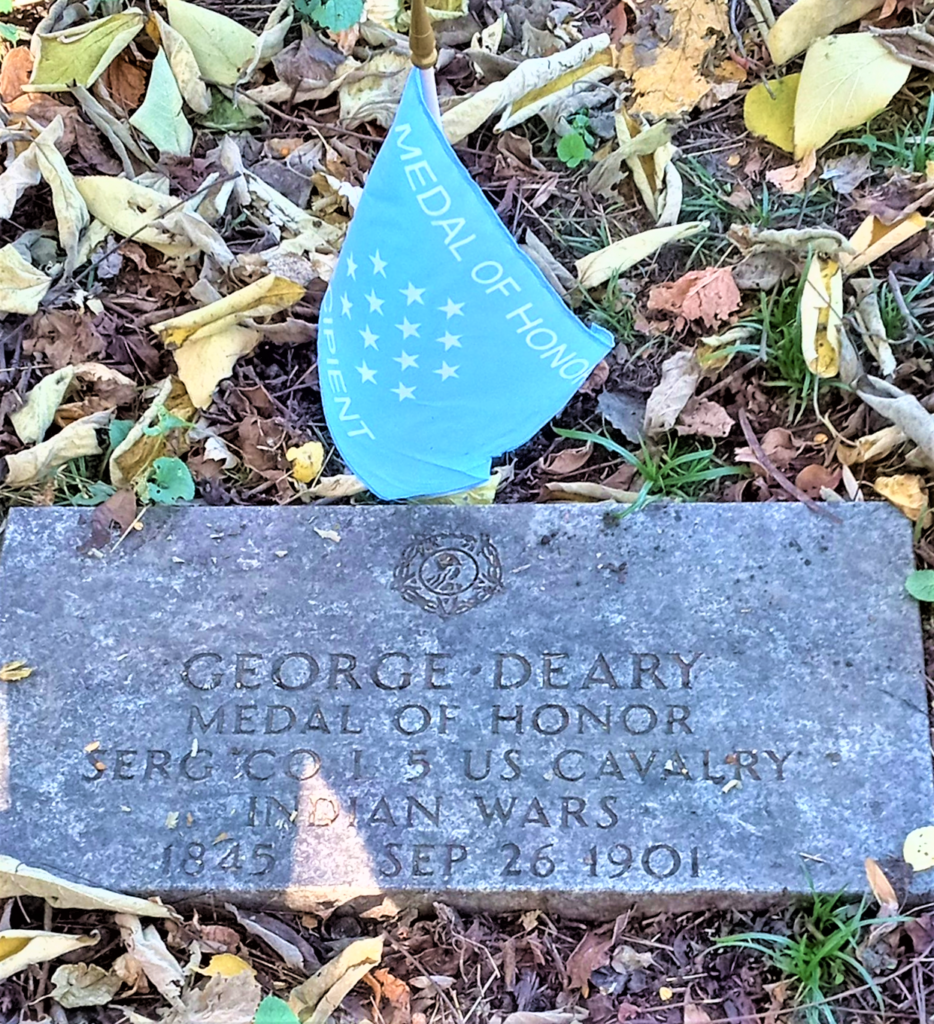 George’s birthday was in January 1845 in Philadelphia, by most accounts. The story of his early years has been muddled by records of a George W Dearry from roughly the same time and place. Dearry served in the Civil War. This George Deary did not, but he did leave the city life for 26 years of adventure and military service in the “Wild West.”

The first of George’s six 5-year enlistments was on May 16, 1870 with the 5th US Cavalry, which took him to the Arizona Territory. It wasn’t long until he was promoted to sergeant, and was based at Camp Grant in what is now Graham County in southeastern Arizona. In 1871 a vigilante group of civilians murdered 144 Apaches in what came to be known as the Fort Grant Massacre. The Army had nothing to do with the slaughter and tried to make reparations, but as more pioneer families settled in the area, many groups of Apaches joined other tribes in North Central Arizona in retaliation, and a guerilla war began which lasted until 1875.

It was during this tour that George was recognized with the Medal of Honor, cited “for gallantry in action on 2 April 1874, while serving with Company L, 5th U.S. Cavalry, in action at Apache Creek, Arizona Territory.”  He received his medal on April 12, 1875. What this action was and exactly where it took place wasn’t explained.

However, there is a story that connects him to what is known as the Battle of Sunset Pass, where a patrol led by 1st Lieutenant Charles King was in pursuit of some suspected thieves from the Tonto tribe. King was wounded when 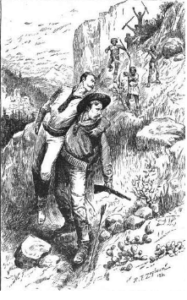 his patrol was ambushed, and Sgt. Bernard Taylor rescued him under heavy fire and carried him back to camp, as depicted here. King, who later wrote a book about it, claimed Taylor, Sgt. Deary, and Sgt Rudolf Von Medem “received the Medal of Honor for their conduct in this battle and other engagements.” In fact, only Taylor was recognized for this engagement; the other two citations mentioned no specific event. In addition, this took place in November of 1874, not April, the men were from Camp Verde (some 200 miles north of Camp Grant), and were in Company A of the 5th Cavalry, not Company L. Even if George was involved in this action, he didn’t get his medal because of it.

From 1871-74, the 5th Cavalry fought the Apaches in 95 engagements before being sent to Wyoming. George reenlisted, first at Fort Washakie and again at Fort McKinney, Wyoming, then served at Fort Omaha,

Nebraska and Fort Sill, Oklahoma. His last enlistment was in 1895 at Fort Brown, Texas, but it was soon followed by his final farewell on August 8, 1896 at Fort Sam Houston. Why he left is unknown.

George returned home to do carpentry work and lived as a boarder with a young family named McGuggan just north of Center City Philadelphia. The 1900 census lists his occupation as a retired soldier. When he died of tuberculosis on September 26, 1901, Mr. McGuggan handled the funeral arrangements, but George wisely left them with the means to pay for it by having a $75 Prudential Life insurance policy.