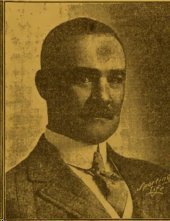 George was one of at least three sons born to John and Catherine (Cresswell) Dovey. At an early age, George moved to Central City in Muhlenberg County Kentucky with his family. His father owned coal property and operated Dovey mines where his sons worked. One long-told tale relates the story of the “Dovey Robbery” which occurred in 1880. In anticipation of a big pay day, the James-Younger Gang planned to rob the Dovey store of the mine payroll. On October 15, 1880, Jesse James, Dick Liddil and Bill Ryan entered the store and ordered John’s son (some reports say it was George) to open the safe. Because the payroll shipment had been delayed, the armed thieves left with only $13 in cash and John’s engraved, gold watch. A few years later, after Jesse James was killed, Dovey’s watch was found among his possessions. Because the watch was engraved with the owner’s name, James’ wife located the family and returned the watch, requesting a receipt for the returned item. 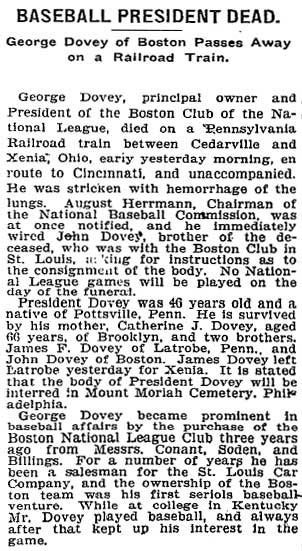 In addition to working in his father’s mining business, George played baseball for the Paducah team. He attended college in Kentucky and eventually gave up the mining business and went to work as a railway man  and salesman with the St. Louis Car Co. In the fall of 1906, he moved to Boston and on November 28 he, along with his brother John, purchased the Boston Baseball Club, including the grounds, for $275,000. In addition to being an avid fan of baseball, George was thoroughly familiar with the game. His knowledge, strong business acumen and amiable personality were well suited to assuming the role of  principal owner and president of the club. He was well regarded and well liked, considered to be a man who made friends easily. After purchasing the last place Boston Beaneaters (NL), many believed that George had the ability and desire to restore a winning team to Boston. The Doveys renamed the team to the Boston Doves. For the 1907 season, they wore all white uniforms to distinguish themselves from the American League Boston Red Sox. Unfortunately, the 1907 season for the Doves had only one bright spot in a dim 58-90 season. On May 8 Big Jeff Pfeffer pitched a no-hitter.

On June 19, 1909, while on a scouting trip to Ohio, George Dovey suffered a pulmonary hemorrhage and died on a Pennsylvania Railroad train. August Herrmann, Chairman of the National Baseball Commission was notified and he wired John Dovey who was in St. Louis with the team. At the time of his death, George was survived by his mother Catherine and brothers John and James. In honor of George Dovey, no National League games were played on June 22, 1909, the day of his funeral in Philadelphia. Upon George’s death, John became sole owner of the Boston Club. After a lackluster 1910 season, he sold the team to William Hepburn Russell.