George was the fourth of five children born to Slovakian immigrants John and Anna Brasko. His father was in the Army from 1899-1904 and helped start The Assumption of the Holy Virgin Russian Orthodox Church in their ethnic neighborhood near the Passyunk Avenue Bridge. He graduated from South Philadelphia High School, then followed in his brothers’ footsteps in walking to work at Atlantic Refining Company across the bridge.

For a brief time in 1940 he was a seaman with the merchant marine, then enlisted in 1942, serving in the Pacific with the Army Air Corps from 1943-45. Like many GIs, marriage soon followed. Eleanor Gladis was his wife for life, and they moved in with her mother a few blocks away at 1854 Ringgold Street until their daughter was born in 1957.

After a total of 41 years at the refinery, George retired as a foreman in 1982. He spent the next 20 years as the previous 20, working part-time as a security guard at Phillies and Eagles games and as an usher at Liberty Bell Racetrack and at the Spectrum. 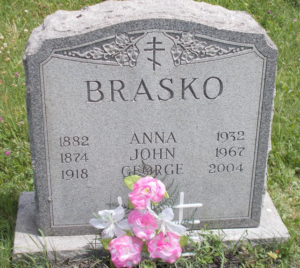 His 2004 obituary said when he worked sporting events he would often wear a rubber nose when children were nearby. He performed magic tricks as a clown and appeared as Santa Claus at Christmas. He also enjoyed bowling, calligraphy, and singing in his church choir. He was buried with his parents here in Section G.