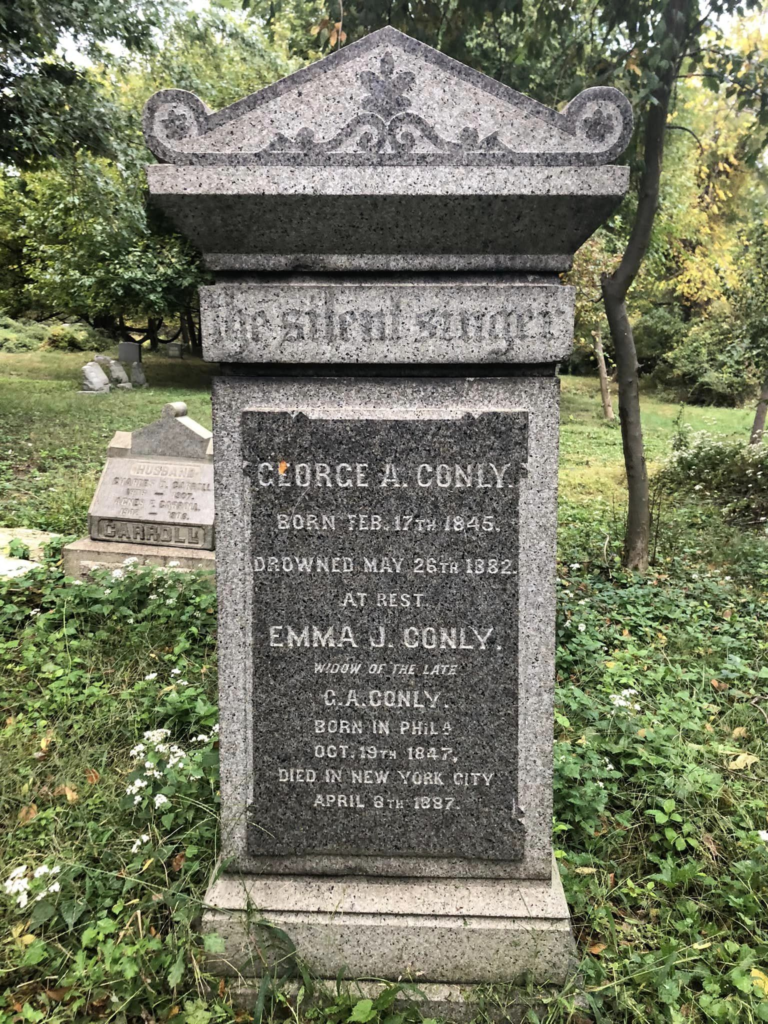 This gravestone describes George as “The Silent Singer,” because his newly discovered musical talent and career in the opera was cut short by an accidental death. His parents were Francis and Mary Conly, who were Irish immigrants in 1839, and they had another son, Frank, who was two years older.

The New York Times ran a detailed obituary for George because he lived in that city when he died:

George Conly was born in Philadelphia in 1845, and in his youth was employed in a type foundry in that city. Afterward he learned the printer’s trade, and at the beginning of the rebellion he enlisted in a Philadelphia regiment and served for three years. He then returned to Philadelphia and to his trade of type-setting. His fine voice, however, attracted attention, and he was induced to study the art of singing… and later made his first appearance in opera as Mephistopheles in Gounod’s “Faust” in Boston. He became a member of the English opera company…. and later on he sang with Mr. Mapleson’s company at Her Majesty’s Theatre in London. 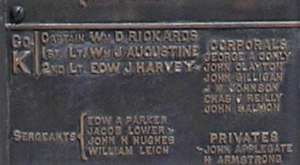 In fact, George enlisted in Company K of the 29th PA Infantry and served from July 11, 1861-July 27, 1865. He was a corporal while the 29th was in action at Antietam and Gettysburg, and then into Tennessee and Georgia. His name is listed on this plaque on the Pennsylvania Monument at Gettysburg. Brother Frank rose to sergeant while in Company B of the 23rd Infantry from 1861-64.

George married Emma J. Menamin, also a Philadelphia native, but the date is unknown. Their first child was born on June 21,1872, but died exactly five months later from hydrocephalus, or fluid on the brain. He was buried here in the same plot where he father would rest. George’s occupation in the annual city directories from 1867-75 was a clerk, referring to his typesetting job. Their second son, Bertram, was born in 1874, followed by George Abraham Conly in 1878. Meanwhile, George’s brother Frank left his career as a wallpaper hanger to pursue a singing career in 1874, and it must have influenced George to do the same around 1876. He applied for a passport in 1878, which confirms the newspaper account that he went to perform in London, apparently that same year.

The 1880 census reveals the family had moved to New York City, his occupation now listed as “opera singer.” His opera company performed in the city May 20, 1882 and then embarked on a tour of New England. While on their 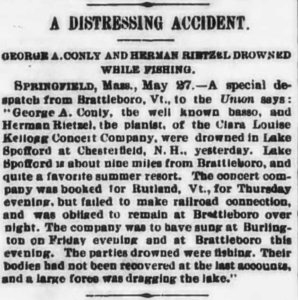 day off, just six days later, George drowned, as described in this local newspaper account. The New York Times picked up the story and continued its obituary with this comment:

Mr. Conly was a remarkably good swimmer… and his friends were greatly surprised by the announcement of his death by drowning…. Mr. Conly was notable for his genial manners and for a certain personal interest he inspired with everyone he met. As to his merits as a musician there can be no question. He was endowed by nature with a genuine basso profundo voice of rich, sonorous, and manly quality, and his fellow artists were by no means the last to give him the credit alike for its possession and its skillful use… A brilliant future was before him in which he might have won both fame and fortune, and his sudden taking off will affect everyone who has known him, and that more extended circle of the public who recognized in him a distinguished artist and a natural musician.

His burial was an extravagant event, attended  by his voice teacher, members of his troupe, and delegations from the Odd Fellows, Masons, and Grand Army of the Republic, which escorted him to rest beside his son. A benefit concert raised $4000 for the families of both men who drowned.

Emma and her sons remained in New York where her sister and husband lived. They would receive guardianship of the boys after she died from tuberculosis five years later. Ironically, it was that same disease that took the life of Bertram in 1892 and George in 1903. Each was buried in the family plot with “The Silent Singer.”