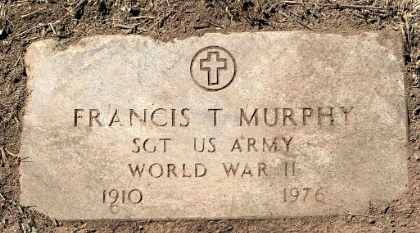 “Frank” Murphy was the seventh of eight children and the youngest of four sons born to John and Margaret. They were both Philadelphia-born, but both of their parents emigrated from Ireland in the mid-1800s. Some documents claim his birthday was June 18, 1910 but that was for Francis Murphy, son of William. The birth certificate for Francis Thomas Murphy confirms it was actually December 27, 1909.

His father had a variety of jobs, so the family moved frequently, but Frank’s early years were spent at 13 Beck Street in the Southwark section. His address in the 1920 and 1930 census listings went from 207 Federal Street to 2128 South Front Street, where John was employed as a watchman for the railroad, and then for a shipyard.

Frank left school after 8th grade, and when he turned 20 the Great Depression made it difficult to find work. He was a day laborer doing odd jobs. He married Grace Reid in 1938 and had the first of three daughters that same year. For the next census and his draft card in 1942, he reported his occupation was a desk clerk at the Warburton Hotel at 20th and Sansom Streets. Frank wasn’t called to join the Army in World War II until May 3, 1945, just as his wife was carrying their third child. 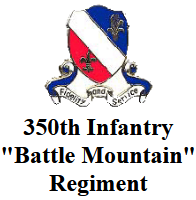 After six months with the 1st Battalion of the 350th Infantry, he was promoted to Sergeant and sent overseas, probably to Italy. He was discharged after serving a term of just ten months, on March 2, 1946.

In the early 1950s the Murphys moved to suburban Collingdale, Delaware County where the girls would graduate high school. Frank died there on March 22, 1976 at age 66, and has a military gravestone here. Grace died in 1999 in Florida. The girls, all married, finished their lives in either South Carolina, Georgia, or Florida, and are presumably buried there.