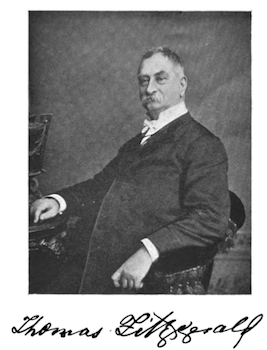 Colonel Thomas Fitzgerald was born in New York City. He first worked as a journalist for the New Brunswick Fredeonian. He moved to Philadelphia in 1844 and worked for the Bulletin and other journals. In 1847 he established the weekly The Item, which became a daily paper in 1852 due to its success.

Colonel Fitzgerald published his first drama, “Light at Last”, 1868 and it ran in New York, Boston, Chicago, and other major cities. His other pieces included “Wolves at Bay”, “Tangle Threads”, “Patrice”, and “Perils of the Night”.

Fitzgerald was controller of Philadelphia public schools and was the first to introduce music into the curriculum. His pamphlet, “Music in Our Public Schools” achieved wide popularity.

He retired from The Item in 1890, leaving the business to his three sons. Fitzgerald’s death occurred while visiting London with his son, Riter, in 1891. 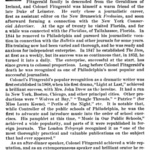 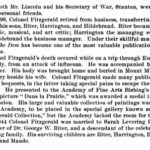