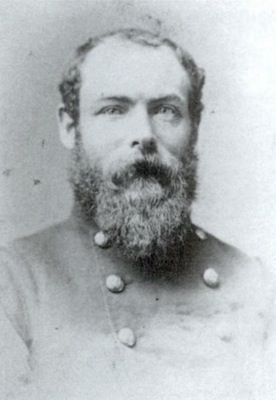 William “Buck” McCandless was born in Ireland, and was raised by his uncle, John McCandless after his parents died when he was a young boy. They immigrated to Philadelphia when he was six. John was a policeman. William attended public schools, apprenticed as a machinist at Norris Locomotive Works, and later ran a locomotive for the Pennsylvania RR. Ignored for promotion he studied law and joined the bar in 1858, thereafter developing a lucrative practice.

On May 27, 1861 (the war started on April 12, 1861 when the Confederates shelled Ft. Sumter in So. Carolina) he enlisted as a private in Capt. Mealy’s first responders, his unit becoming part of the 2nd PA Reserves, 31st Regiment PVI (PA Volunteer Infantry). As the new unit was forming he was promoted to Major; promoted to Lt. Colonel on October 22, 1861; and on August 1, 1862 promoted to a full Colonel.

He commanded the 2nd PA while guarding Washington, joined in the battles of 2nd Manassas, Mechanicsville, Peninsula Campaign (where he commanded the entire Regiment), South Mountain, Fredericksburg, Gettysburg, the Wilderness Campaign, and Spotsylvania Courthouse. During these battles there were some notable events:

At 2nd Manassas he was shot in the groin and sent to recover in Washington. Returned to his unit in 6 months.

Fredericksburg (December 11-15,1862) was an ill-conceived (by Gen. Burnside) frontal attack over a flooding and cold Rappahannock river into the town where sharpshooters were able to man the properties on the other side of the river and pick off the engineers attempting to build pontoon bridges. Once they cleared the town they had to traverse 800 yards of open muddy fields, upon which the Rebels were able to rain artillery and rifle fire from hills above and behind 4 foot high stone walls. The Union position there was dubbed the “Slaughter Pen” by the men. On Dec. 13th the right brigade of Maj. Gen George Meade’s Third Division was ordered to attack through the “Pen.” Three regiments were lined up, the 2nd PA Infantry on the left, the 121st PA in the center, and the 1st PA commanded by McCandless on the right. Another division commanded by Gen Gibbons was in line with the 1st PA on the right. The three regiments moved rapidly forward and routed the enemy, breaching their line (and were the only unit to do so in the battle). When they reached about 800 yards and they found that Gibbons troops had not been able to keep up the pace which left their right flank without cover, and were now taking enfilade fire from the rebels. The three regiments had to retreat. Burnside ordered wave after futile wave of units into the “Pen.” Fredericksburg was a disaster—The Union suffered 12,653 casualties (killed, wounded, captured/missing) and the South 5,377.

In Mechanicsville with his troops hopelessly out numbered, McCandless’s troops repulsed 3 assaults at fixed bayonet.

At Gettysburg on July 3rd he commanded General Samuel Crawford’s 1st Brigade leading the right flank of the famous Plum Run that secured the Wheat Field (aka Valley of Death). On the 4th he captured hundreds of Rebels that were trying to retreat from the battlefield with Lee’s army.

At the Wilderness Campaign, as Division Commander he led another charge but was captured. He escaped and led his unit to Spotsylvania Court House where on May 8, 1864 he suffered a serious wound when canister shrapnel broke his left arm leaving the limb partially disabled.

Following the Gettsyburg battle General Crawford recommended that McCandless be promoted to Brigadier General, but he declined. Following the Wilderness Campaign both Gen. U.S.Grant and Gen George Meade (who was his commander in most of the engagements) recommended his promotion to Brig. General and he again declined.

His obituary composed at time of his death by the New York Herald read, “As an officer he had won great distinction, and was a favorite with his companions in arms, who now deeply feel his departure”.