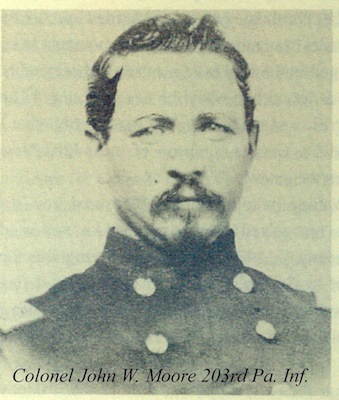 Born in Philadelphia in 1836, John was the middle child between two sisters and raised by his mother Mary, a native of Ireland. He entered the Civil War in July 1861 while recruiting men for the regiment in which he would serve. He was commissioned as a Captain in the 66th Pennsylvania Volunteer Infantry.

For three months they were stationed in a chain of forts forming the southern defenses of Washington D.C. In March of 1862 the unit became the 99th Pennsylvania Volunteer infantry with the addition of troops from another unit. In August it participated in the battles of Bull Run and Chantilly.

At Fredericksburg on December 13, the 99th crossed the Rappahonnock River amid desperate fighting. It lost 60 officers and men, killed and wounded. At Chancellorsville the 99th executed a notable charge by moonlight and later covered the retreat of the army. Captain Moore became Major Moore on February 20, 1863, got married the following month while on furlough, and became a father later that year.

The Battle of Gettysburg took place on July 1-3, 1863. On July 1 under the command of Major Moore, the regiment marched from Emmitsburg, Maryland to Gettysburg and bivouacked at night in the Peach Orchard. On day 2 the regiment engaged in skirmishing near the Rogers house, fought in the Wheatfield, the Rose Woods, and was then sent to the Devil’s Den where it successfully held the Union flank. Major Moore was wounded but returned to the field the next day when they were sent to Cemetery Ridge and fought to repulse Pickett’s Charge.

A monument was erected in 1886 at the position on the Devil’s Den flank that was stoutly held by the 99th. A second memorial was placed, shown here, in 1889.

John was promoted to Colonel on September 16, 1864 by General David G. Birney and ordered to form a new regiment to serve as sharpshooters. It was named the 203rd Pennsylvania Volunteers. Birney died soon after reaching the field, however, and the 203rd was treated as an ordinary infantry regiment. The men were from the counties of Philadelphia, Lancaster, Chester, Delaware and Lycoming. The regiment departed for the front and arrived at Petersburg on September 27th. Over the next two months they had engagements at Deep Bottom, Chapinus Farm, New Market Road, and Malvern Hill.

The “Notables” life story of Colonel Edwin R. Biles describes how General Grant in December 1864 ordered Biles and the 99th to march south from the siege of Petersburg along the Weldon-Wilmington Railroad and destroy 16 miles of track near Jarrett, Virginia. The purpose was to cut the supply of materials coming from Wilmington North Carolina, the last port supplied from the sea, to the Confederate Army. At the other end of the supply line was Fort Fisher, which protected the port where the Cape Fear River meets the Atlantic Ocean.

The fort was constructed with huge mounds of sand and soil covered with grass, because forts built with wood or stone were not strong enough to resist cannon fire. The mounds were 35 feet high, strung together in a row and designed to absorb shelling. There were magazines built into the mounds, as well as rooms and passageways for troops. Between the mounds, about 15 feet high, were one or two gun mounts. Around the mounts were wooden traverses, which protected the gun crews from incoming and enfilading fire (flanking fire). The traverses measured 60 feet wide, 50 feet deep and 20 feet high. 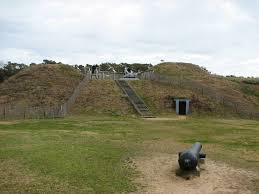 This photo shows a reconstruction of a small portion of Fort Fisher taken from inside the fort. Most of the original fort has since washed into the ocean. The magazine or passageway entrance is visible in the lower right as well as steps leading up to the guns, the gun mounts, and the traverses built around the gun mounts.

Fort Fisher was constructed in the form of an inverted L with the long portion facing the Atlantic Ocean and the short portion of the L protecting the fort from enemy troops moving south from Wilmington. 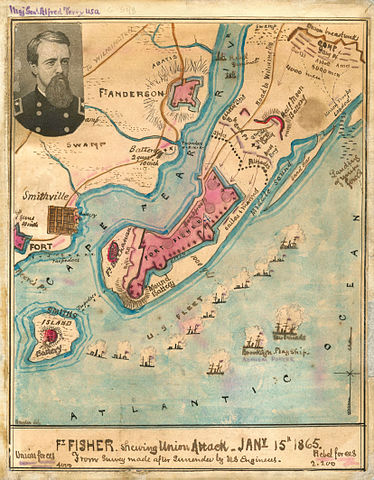 There were two battles that took place within weeks of each other. The Union forces in both battles were basically the same, but the high command was different. The first battle occurred on December 24, 1864 commanded by Maj. General Benjamin Butler.  The second battle was commanded by Maj. General Alfred Terry. In both battles troops were shipped out of Hampton Roads, Virginia in transport ships and the gunships left from Beaufort, North Carolina.  The troops in the first battle were able to land on the peninsula but were repulsed and Butler aborted the mission. Once this happened General Grant quickly relieved General Butler and replaced him with General Terry.

The second battle began on January 6, 1865 with the embarkation from Hampton Roads of 9,600 troops on transport ships. On January 12, 58 gunships under the command of Admiral David D. Porter departed from Beaufort and arrived the same evening.  The battle began the next morning when the gunships shelled the peninsula about three miles north of the fort in an area chosen by Terry as the troop landing zone.

The troops began to disembark for the landing zone after the gunships redirected their fire to the south toward the fort. The gunships were able to destroy all but two cannons at the fort and all the telegraph wires, but the mounds, as designed, just absorbed the cannon fire. General Terry was then able to position the infantry, including the 203rd, in a line of entrenchments, crossing the entire peninsula, east to west.

General Terry also sent troops north on the peninsula to block the Rebels from driving south from Wilmington to attack the rear of the Union army. By mid-afternoon the forces attacked the fort by tearing down the wooden palisades, climbing the mounds on the western side of the peninsula, and attacking each gun emplacement and traverse one by one. There were seventeen traverses that had to be conquered. Colonel Moore led his 203rd regiment up the fourth mound and was rallying his troops by attacking the fourth traverse, charging with his regimental flag in one hand and a sword in the other. He fell with ten bullets in his chest while holding the flag that was said to have eighty rents (bullet and shrapnel holes) in it.  He died immediately.

Fort Fisher fell that night and by February 22, Wilmington was abandoned to the Union. The Confederacy was now without a reliable source of supply and the noose was being tightened 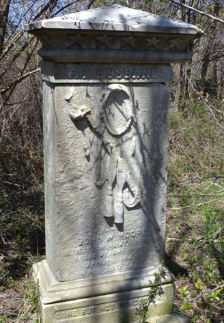 on the Rebel cause. Petersburg was abandoned on March 25 and the Confederacy surrendered at Appomattox on April 9.

The second in command of the forces under General Terry was Brigadier General Adelbert Ames, and in his first official report, wrote of Colonel Moore, “He behaved with the most distinguished gallantry, in advance of his regiment. Few equaled, none surpassed this brave officer”.

His wife Ellen was a member of the Daughters of the American Revolution and as such she could trace her ancestry back to the Founding Fathers, so she provided this impressive monument to her husband. Her daughter Nellie never knew her father, as he never knew his, and she died of 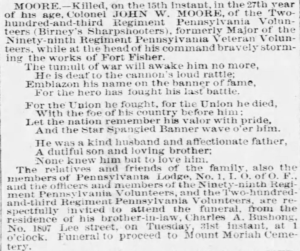 tuberculosis when she was 18. Ellen would join Nellie next to John when she died in 1926 at age 87.

After his death the young Colonel was not forgotten and was honored as a brave war hero by Philadelphians. A crowd of 10,000 people gathered at Mount Moriah in 1889 to hear speeches and pay their respects in his memory. In 1905, 40 years after his death, another gathering at Mt. Moriah honored his courage and sacrifice, with Ellen in attendance.

The Moore and Biles Relationship

Colonel John Moore and Colonel Edwin Biles both started their careers with the 99th Pennsylvania Volunteers and they both advanced in rank at about the same time. One could imagine they were equals, reported to the same commanders, sat in the same staff meetings, supported each other in battle and saw each other frequently. Moore died in 1865 and Biles in 1883. Both were interred in Mount Moriah, about 200 yards from one another, Moore in Section 36 and Biles in Section 30.