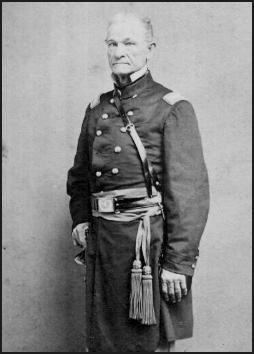 He became a member of the Junior Artillery Company at 18 and was later a captain of a company called the National Artillerists. It appears John was married by 1822 and had three children over the next 13 years.

He was made a Freemason in the Montgomery Lodge 19 on October 2, 1817 and was elected as the Right Worshipful Master in December, 1828. He was the representative to the Grand Lodge for many years, one of the trustees of the Grand Lodge Dues Fund, and later made an honorary life member.

In July, 1861 John recruited men for the 29th Pennsylvania Infantry Volunteers and was elected Colonel of the unit. The first major action was May 24-28, 1862 at the first Battle of Winchester. Union forces (6,500 men) were commanded by Major General Nathaniel Banks and the South (16,000) by Major General T. J. Stonewall Jackson. The South won the battle and Col. Murphy was captured. A captain in the 29th, in an after-action report to his superior, wrote “Col. John K. Murphy acted coolly and calmly during the engagement. He had lost his horse upon the field, and being advanced in age, was unable to make a successful retreat. He was captured by the rebel cavalry in the streets of Winchester after bravely attempting a resistance.”

He was sent to two notorious Rebel prisons: Libby Prison in Richmond and Salisbury Prison, near Charlotte, North Carolina. After a prisoner exchange in December, the Colonel returned to command the 29th that same month in the Battle of Fredericksburg, and was honorably discharged due to age on April 23, 1863.

But age didn’t stop him. He was then commissioned first as Captain and commander of the 121st Company, 2nd Veterans Reserve Battalion, then the 131st Company, 2nd Reserve Battalion, and led the two units in the defenses of Philadelphia until the end of the war. On March 24, 1865 John was given the honorary rank of Brevet Brigadier General for “gallant and meritorious service.”

A biographer of his time wrote of him, “General Murphy was a man of fine presence, of great physical strength, of indomitable courage, while the numerous responsible positions he held, both civil and military, prove him to have been of exalted capacities. In the community where he spent so many years of an active and useful life, his upright character 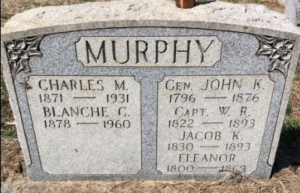 commanded universal respect as one who faithfully performed all the duties of the citizen, the patriot, and soldier.”

He died in Philadelphia at the age of 81, and is interred with Eleanor and his two sons, William and Jacob. The relationship of the two who are named on the left side of his headstone hasn’t yet been determined.