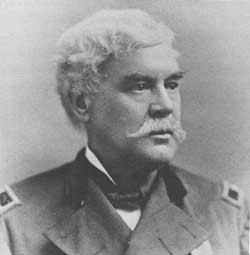 Charles Frederick Ruff was born in Philadelphia, and at the age of 16 he entered the U. S. Military Academy at West Point. He graduated in 1938 in a class of 44 and was the 894th cadet to graduate since the Academy was formed in 1802.

The next five years was spent in frontier country in the mid-west. Charles was a 2nd Lieutenant in the 1st Dragoons, a cavalry unit that fights dismounted with carbines, sabers and pistols. The first year was spent at the Cavalry School for Practice in Carlisle, PA, and was assigned to the recruiting service in 1839. Then his unit went to frontier duty where they engaged Native American nations and tribes such as the Sioux, Osage, Kiowa, Comanche, Choctaw, and Chickasaw in Kansas, Missouri, Osage Country, and Iowa. Their job involved protecting settlers, supporting the country’s efforts to secure treaties with the nations, and helping to resolve disagreements between the nations.

In 1843 he resigned to become an attorney in Liberty, Mo. Charles reentered the army on June 18, 1846 serving in the recruiting service in Missouri. The following month he entered the War with Mexico as a Captain in a Mounted Rifle unit (cavalry fighting with rifles on horseback).

His first action was a skirmish on August 1, 1847 at San Juan de los Llanos and he was recommended for Brevet Major. A brevet was a commission promoting an officer to a higher rank without increase of pay, usually as a reward “for gallant and meritorious conduct.” He went on to fight in the Battles of Contreras, Molino del Rey (where he was wounded), Chapultepec, and the Assault and Capture of the City of Mexico in September, 1847.

In 1848 he returned to frontier duty at Fort Kearny, Nebraska as Brevet Major of the 3rd Calvary. While there Charles married Ann (Annie) Dougherty, had two daughters, and played a major role in building a route to the Pacific coast, known as The Oregon Trail. Settlers were flooding west to find land and gold and riches in California and Oregon. Prior to this time the army tried to protect them with a show of force, treaties, punitive military expeditions, and military escorts.

The trail was begun by Brevet Col. William Loring who left Fort Leavenworth Kansas on May 10, 1849 with 600 men, 700 horses, 171 wagons, 1200 mules and some oxen. He reached Fort Kearny on May 31 where he was joined by Brevet Major Ruff and his men. They left enough men and supplies to keep that garrison safe, as they would for subsequent garrisons that would be established as way-stations along the Trail. They arrived at their destination 2500 miles later, at Oregon City on October 8th.

It is estimated that 35,000 individuals took part in the great migration that year, including Charles’ wife  and their daughters, Mary, age 4, and Margaret, age 1.

In the 1850s he continued with frontier duties in Texas and New Mexico, and had specific assignments as Superintendent of the Cavalry Recruiting Service (1852-53), and commanding the Cavalry School for Practice (1853-55). A third daughter, Annie, arrived in 1854.

In 1861 he was promoted to Lt. Colonel and assigned as a Mustering Officer in his hometown of Philadelphia. On June 12, 1863 Pennsylvania Governor A. G. Curtin issued an urgent call for a militia to defend the state against an invasion by the Rebels. On June 28th, three days before Gettysburg, Curtin wired President Lincoln, urging him to transfer Ruff to mustering duty under General Couch in eastern Pennsylvania to raise the militia. He wrote of Ruff as “a graduate of West Point, an experienced and thoroughly educated officer.” The transfer was made and Charles was credited with raising 50,000 volunteers. 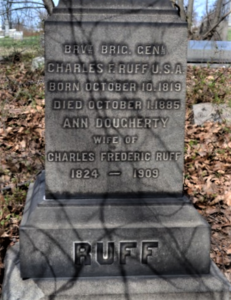 He retired from active duty on March 3

0 1864 and on March 13, 1865 he was granted promotions to Brevet Colonel and Brevet Brig. General “for the faithful and meritorious services in recruiting the Armies of the United States.”

Following the Army he served on Court Martial duty (1867-68), Judge Advocate of the Department East, Acting Adjutant-General (1868), and was a Professor of Military Science at the University of Pennsylvania (1868-1870).

Charles died in Philadelphia on October 1, 1885 and is interred in Section 105, Lot 37. His wife Annie died in 1909 and is interred there along with all three daughters. 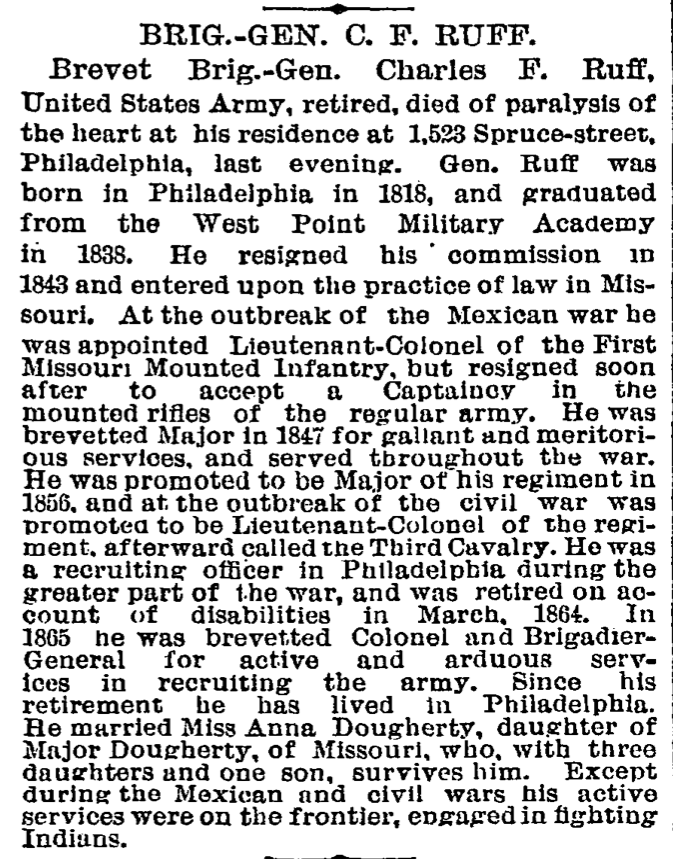