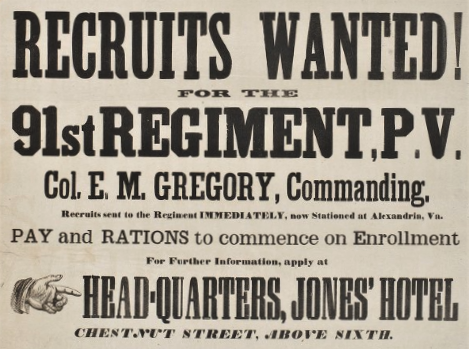 Charles grew up in a family of seven children and was named after his father, who was a weaver. Perhaps because of a reputation for poor working conditions in the textile industry, none of the sons followed him in that vocation. Charles and his brother Tom were apprentice coopers, making oak barrels, as the country was embroiled in the Civil War.

The 91st Pennsylvania Infantry had been organized in Philadelphia in the fall of 1861, but Charles was too young to join then. They went through some hard times, including the battle at Gettysburg in 1863. The men were given a furlough at the start of 1864, and most returned home, marching down the street to Independence Hall and setting up a recruiting station. Charles might have even seen the parade and felt inspired. He was 19 when he signed up on January 21 and became part of Company E.

As the fighting dragged on past its third winter, they headed south and straight into the Overland Campaign in Virginia, suffering heavy casualties in the Battle of the Wilderness and at Spotsylvania Court House. Charles and his company were on the front lines of the Union Army as it approached Richmond and endured the Siege of Petersburg from June 1864 through March 1865. Driving the Confederate Army to Appomattox Court House, the 91st witnessed the events surrounding the formal surrender and laying down of weapons.

On May 23rd, the new President, Andrew Johnson, ordered a “Grand Review of the Armies,” giving Charles a chance to march in his own parade. It must have been an emotional time, considering the bloodshed he saw, the battle fatigue he suffered, the victory for General Grant, then the assassination of President Lincoln. The 91st returned home and disbanded July 10.

Charles resumed his work in the barrel business. He married Catharine Atherholt in 1866 and they continued to live with his parents at 722 Espy St. There they had their only child, George, who was born prematurely and lived just 12 hours on June 26, 1867.

Like his brother Tom, who died in 1872, Charles became afflicted with tuberculosis. He was treated for it at the “State Lunatic Hospital at Norristown” northwest of the city. It had a separate facility for “consumptive” patients, and it was there he died on March 20, 1893. His mother was buried beside him when she died in 1902.