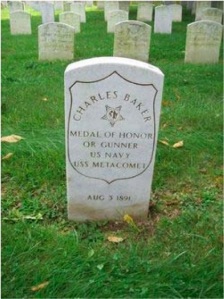 He served in the Civil War in the Union Navy as a Quarter Gunner on board the “USS Metacomet”. He was awarded the CMOH for his bravery on August 5, 1864 in Mobile Bay, Alabama while serving as a member of the boat’s crew which went to the rescue of the Union monitor “USS Tecumseh” when that vessel was struck by a torpedo in passing the enemy forts. His citation reads “Q.G. Baker braved the enemy fire which was said by the admiral to be “one of the most galling” he had ever seen, and aided in rescuing from death 10 of the crew of the “Tecumseh”, eliciting the admiration of both friend and foe”. His Medal was issued on January 15, 1866.