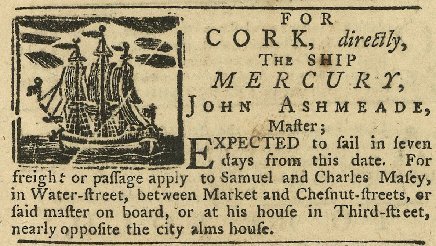 The Ashmead family came from Cheltenham, England in 1682 and settled in what is now Cheltenham in Montgomery County, PA. John Ashmead was born in Germantown, PA, the son of John and Ann Rush Ashmead. Descended from three generations of farmers, John received a good education and chose to forego farming for life in Philadelphia.

He secured a clerk position at the mercantile house of Benjamin Mifflin. Sensing the young man’s restlessness, Mifflin encouraged the 19-year-old to pursue his dream of going to sea.  John’s interest in Mifflin’s 16-year-old daughter, Mary, may have also spurred Mifflin’s encouragement of John’s attraction to the sea. Mary was the niece of Governor Thomas Mifflin, first Governor of the Commonwealth of Pennsylvania.

John married Mary in January of 1761 and they had nine children. Years later he recalled that he spent more than 30 years of his married life at sea. Benjamin Mifflin owned a ship, the New York, which was sitting in the Delaware River. An embargo placed on outgoing ships by Pennsylvania Governor Denny  in response to a decree from British Commander Major General Abercromby. The French and Indian War was underway and Abercromby, planning an attack on a French fort on Lake Champlain, didn’t want his movements disclosed. Months into the embargo, shippers, merchants, and crews were becoming restless.

The New York‘s captain, Edward Walsh, decided, with Mifflin’s implicit approval, to run the embargo.  He set sail for St. Croix with young John Ashmead serving as super cargo.  The super cargo serves aboard the vessel, is employed by and represents the owner of the merchant ship by overseeing the cargo, selling merchandise in ports and buying goods for return to home port. This was the first voyage of John’s long, record-setting career as a mariner.  He would log more than 100 voyages in his lifetime.

John’s participation in the Revolution began in January 1776. The Continental Congress had appointed a Marine Committee and authorized the building of thirteen frigates (warships built for speed and maneuverability). The Committee then selected commissioners to oversee the construction, and these commissioners appointed John as clerk in the Wharton and Humphreys shipyard. Frigate #2  (later named the Randolph) was under construction and John’s daily duties included keeping time records, hiring labor and doing  whatever was needed to assist the builders.

During this time John also joined Captain Joseph Cowperthwait’s militia. The group was known as the Quaker Light Infantry because it was composed of Quakers or descendants of Quakers. Although John was a Baptist, he was descended from Quakers. When the militia was called to Trenton for the defense of New Jersey, John was exempted when the Committee requested he not be sent due to his “necessary business” in the shipyard. Once the Randolph  was launched, Ashmead was appointed to supervise the construction of a Continental brig which was to be called the Mercury. John was named commander of this ship and thus began his active participation in the Revolution.

The years after the Revolution found John continuing the seafarers life. A constant succession of ships and travels to locations, both exotic and domestic kept him busy. In 1784 the China trade opened to American ships and  John became the sixth Philadelphia skipper to undertake the arduous voyage. His ship, the Union, cleared port on March 22, 1789 and after 180 days and 17,150 miles reached its destination of Canton. He would return home 5 months later with a full cargo of teas, silks and chinaware.

John Ashmead’s final voyage ended on April 8, 1805 and he returned to his home on Sansom Street. Although no longer sailing the seas, the Captain remained involved in the sailing, shipping and merchant trades.  His knowledge, skill and sense of discipline would contribute to his success on land as well. In 1806 he was appointed by Governor McKean as assistant warden of the Port of Philadelphia. The Board of Port Wardens consisted of a master warden and 6 assistants. They were in charge of navigation in the Delaware. In 1809, he was “appointed and commissioned” by Governor Snyder to the position of Master Warden of the Port of Philadelphia.

Captain John Ashmead died four years after his wife and ten years after his son. They were all buried in the First Baptist Church’s burial ground on the south side of the 200 block of Arch Street. When the church moved in 1855, it was decided to purchase a large plot at the new Mount Moriah cemetery and the graves were supposed to be re-interred. Construction crews at the Arch Street site in 2016 discovered that the job was never finished. A team of scientists headed by the Mütter Museum collected the remains of about 500 individuals, which are now being studied under the title The Arch Street Project.

Image: This advertisement for freight and passage aboard Ashmead’s ship, Mercury, appeared in the September 19, 1765, issue of the Pennsylvania Journal.