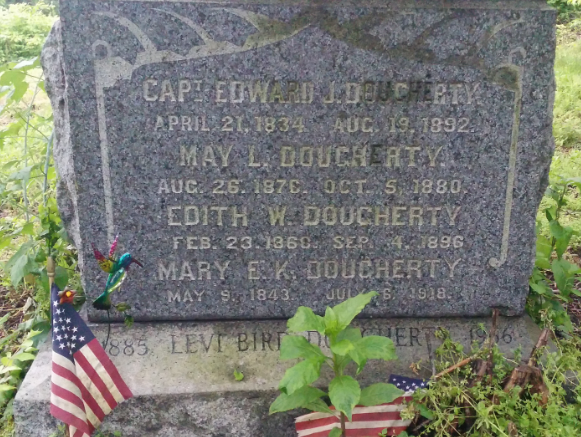 What is known of Edward’s youth is only that he was born and raised in Delaware. By1860 he was a wheelwright, one who makes and repairs wooden wheels. He was living in Wilmington with his widowed mother, two older sisters and a younger brother.

Edward married Mary Peoples in New Castle at the end of October, 1862, four months after he joined Company C of the 4th Delaware Infantry. He was promoted to sergeant and remained with the unit until the end of the war, somehow managing a furlough that produced their first daughter, Lillian, toward the end of 1864. His regiment was among those that witnessed Lee’s surrender at Appomattox the following April.

After the war he served as Wilmington’s chief of police for two terms. During that time the family added Edward Jr., Edith, and Caroline. In the mid-1870s they moved to Philadelphia when a job with the Pinkerton National Detective Agency came available. Their fourth daughter, May, was born there in 1876 but died four years later 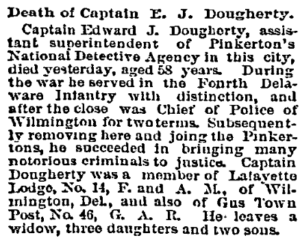 so she was the first to be buried here at Mount Moriah. A second son, Levi Bird Dougherty, was born in 1883.

Edward died of chronic kidney disease in 1892 and his life was honored in this obituary. Daughter Edith was buried with him four years later, as was Mary when she died in 1918. The last surviving child, Levi, was added to the bottom of the family gravestone after he died in 1966.