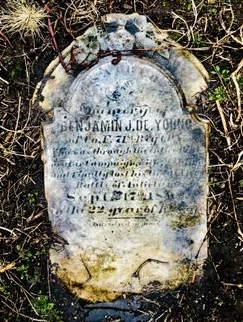 When Benjamin was born in 1841 in Philadelphia, his father was 21 and his mother was 18. He had four younger siblings as the nation headed into the Civil War, and one of them followed him into the Army. Benjamin joined Company F of the 71st Pennsylvania Infantry on July 14, 1861. His brother, Theodore, joined the 72nd Infantry a month later, but he was either 16 or 17, telling his recruiters he was two years older than he really was.

Benjamin served with the 71st in the Peninsula Campaign in the spring of 1862, followed by the battles of Second Bull Run and Chantilly. He lost his life at the Battle of Antietam on September 17.

ne-third of the entire regiment is said to have been either killed or wounded on that day. This 73-foot tall monument on the battlefield honors the Philadelphia Brigade, of which the 71st and 72nd were a part.

During the first three hours of that battle, the struggle was over a 24-acre cornfield which changed hands six times with no decisive winner. The entire battle lasted 12 hours but left 23,000 casualties.

Theodore was there as well but he survived, despite heavy losses in his regiment. (He went on to fight in Gettysburg and other battles, but was captured in June, 1864 and held for 10 months as a prisoner of war.)

Due to the tremendous number of bodies left on that Maryland farm, most were buried there. It appears Benjamin’s body was brought home and buried here in Section 6, Lot 6. Theodore, both parents, and two sisters are also in this  same plot. Military headstones for both soldiers were provided, but their whereabouts are unknown.