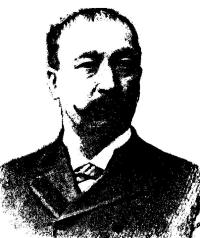 Augustus Caesar Buell was born to Simon and Julia Buell, residents of King’s Settlement, near Norwich, New York in 1847. Beyond this piece of personal information, the facts of Buell’s life are fraught with inconsistencies and possibly outright falsehoods. He was a Civil War veteran and according to the New York Report of the Adjutant General, Buell enlisted on August 21, 1863 claiming to be 18 years old. In actuality, he would have been just shy of his 16th birthday. He mustered in as a private, was promoted to corporal in November of 1863 and mustered out as a private in Manchester, VA on July 31, 1865. He served with Company L 20th NY Volunteer Cavalry. What transpired to cause the demotion back to private is unknown.

After leaving the military, he continued his education in New York and graduated from Cazenovia Seminary in 1868. From this point on, Buell’s professional titles include journalist, civil engineer, biographer, editor, correspondent and secretary to a Philadelphia shipbuilder. As a journalist, Buell wrote a series of articles for the Washington National Tribune based on his recollections of the Civil War. These articles were later assembled into his first book The Cannoneer. Recollections of Service in the Army of the Potomac ‘By A Detached Volunteer’ in the Regular Artillery issued in 1890. Despite the compelling firsthand accounts of the battle at Gettysburg in the book, military records show that Buell entered the army weeks after the infamous battle took place. Biographies followed for John Paul Jones, William Penn, Andrew Jackson and others. However, history has shown that although the outline for most of this work was based in fact, many of the details, anecdotal stories and reference sources were fabricated. Buell’s work is still cited and referenced in writings today, but there is sufficient evidence that his work cannot be relied upon for any historical accuracy. Even the details of his own life were edited and revised to suit his needs. It’s been said that Augustus Buell never let the truth get in the way of a good story.