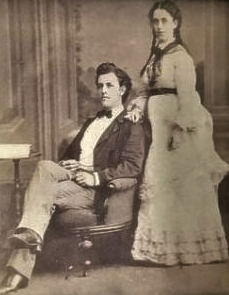 Arthur was a preacher’s kid, although his father died before Arthur was born. Not long afterward, his mother moved the family, including four sisters and a brother, from Providence, Rhode Island to her hometown of Philadelphia. Formal education ended early when he began working in a dry goods store at age 12. His mother and two sisters worked as teachers in a Bible school.

Arthur got into the 15th Pennsylvania Cavalry Regiment at age 16, and served until the end of the Civil War. He caught typhoid fever while in action in the Battle of Stones River, and was treated at a hospital in Murfreesboro, Tennessee. While recovering, the hospital staff noticed his legible handwriting, and assigned him to light duty as the chief clerk at the hospital for a year. He then reported for duty to General William Tecumseh Sherman, and was part of the “March to the Sea” through Georgia, becoming Sherman’s personal secretary at Savannah. He wrote the papers for General Joseph E. Johnston’s surrender to Sherman on April 26, 1865, then kept the inkstand and pen as mementos of the occasion.

After the war, Arthur became an entrepreneur and industrialist. He manufactured and installed gasworks in Philadelphia and served as general manager of the United Gas Improvement Company. In 1870 he married a Philadelphia native, Caroline Dickson Gregory, and they had six children.

He served as president of multiple fuel and gas light companies in the United States and Canada, and grew interested in mining as well. He established the Etowah Iron Company in  Bartow County, Georgia, had mining interests in South America, became a millionaire by 1889, and was a business partner with State Senator Joseph Gazzam, shown on this letterhead as his vice president:

Arthur moved his family to Cartersville, Georgia, in 1890. The town is northwest of Atlanta, named for a plantation owner, has no known connection to President Jimmy Carter, and might have been on the route taken by Private Granger as General Sherman marched through Georgia.

Inspired by the Franklin Institute in Philadelphia, Arthur found another passion: astronomy. He expanded his two-room house to include three floors, twenty-eight rooms and the largest observatory and telescope in the South. He named his mansion “Overlook” and the Grangers became seriously involved in the social and cultural scene in Cartersville and Atlanta. Caroline was one of the founders and a president of the Georgia Federation of Women’s Clubs.

Not surprisingly, Arthur was a life member of the Franklin Institute, as well as the American Institute of Mining Engineers, the American Association for the Advancement of Science, and the Royal Society of Arts. After his death from diabetes, his telescope was sold to a traveling circus, and later purchased by the University of Texas at Austin. His observatory was moved to Agnes Scott College in Atlanta.

Arthur retired in 1909 and was in Philadelphia at the time he died five years later. He was buried in the family plot here with his mother and three of his siblings. Caroline lived in Georgia until her death in 1937 and was buried in Atlanta. All that remains to mark Arthur’s life as a husband and father, his service to his country, and his great business and financial success is this simple stone. 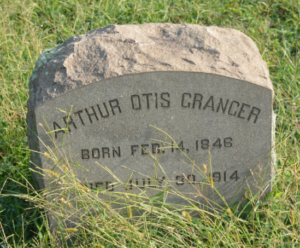