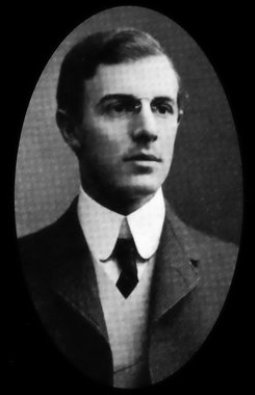 Philadelphians associate the Wanamaker name with the once-famous department store, but in the

1890s there were other clothing stores in Center City run by John Wanamaker’s brothers, including Francis Marion Wanamaker. His wife’s maiden name was Ida Lodor, so his first son, born in 1873, was named Alfred Lodor Wanamaker. He  graduated from the University of Pennsylvania in 1895 and became a lawyer and the father of this story’s central figure.

However, this nephew of the famous merchant had a poor track record as a husband and father. Alfred first married Mattie Gilbert in 1898, then married Amelia Gerhard in 1902, had his namesake son in 1905, and by the 1910 census he was again divorced. The third swing was a hit. The former Lizzie Kidd gave him a daughter, Frances Marion Wanamaker, in 1914, but he became a widow in 1932. A decade later, at age 69, he found a successful 37-year-old podiatrist who would became Bride #4 until he died in 1951.

With that as background, the 1910 census shows Al Jr. and his mother living with her mother and three brothers, with Uncle Fred being his father-figure over the next 20 years. Then Amelia died when he was 17. Al finished high school, and after Fred died in 1933, he continued living with his aunt at 639 North 16th Street in the Spring Garden section. He became a radio repairman at Philco on Arch Street.

Al enlisted on April 15, 1942 as a private and served stateside until he was discharged on June 25, 1948. No record of his duties has been found. He married Margaret Eleanor Field in 1945 and they had a boy, Franklin, in 1948. The 1950 census shows them living at 2106 South Gould Street, just south of Mount Moriah. His job title was television engineer, perhaps for his pre-war employer, Philco.

A sudden confirmation of pancreatic cancer took the life of Eleanor on April 23, 1951, eight months before Al’s father died. Al probably buried her at Mount Moriah because it was nearby. He then turned to his in-laws, George and Louisa Field, to raise his son, which they must have done, possibly to the exclusion of Al. George’s obituary in 1975 said he was survived by his wife, their grandson Franklin, 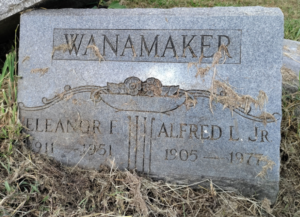 and his son, but there was no mention of Al. The Fields were buried near their daughter in Section B, Range 2, Lot 4.

Did Al ever have a relationship with his father, or did he treat his son in the same way he was treated? There were lots of Wanamakers in Philadelphia (three who were named Alfred registered for the draft), but living with a famous last name can have its drawbacks. Apparently Al never remarried and was buried next to his wife, but the rest of his story remains to be discovered.