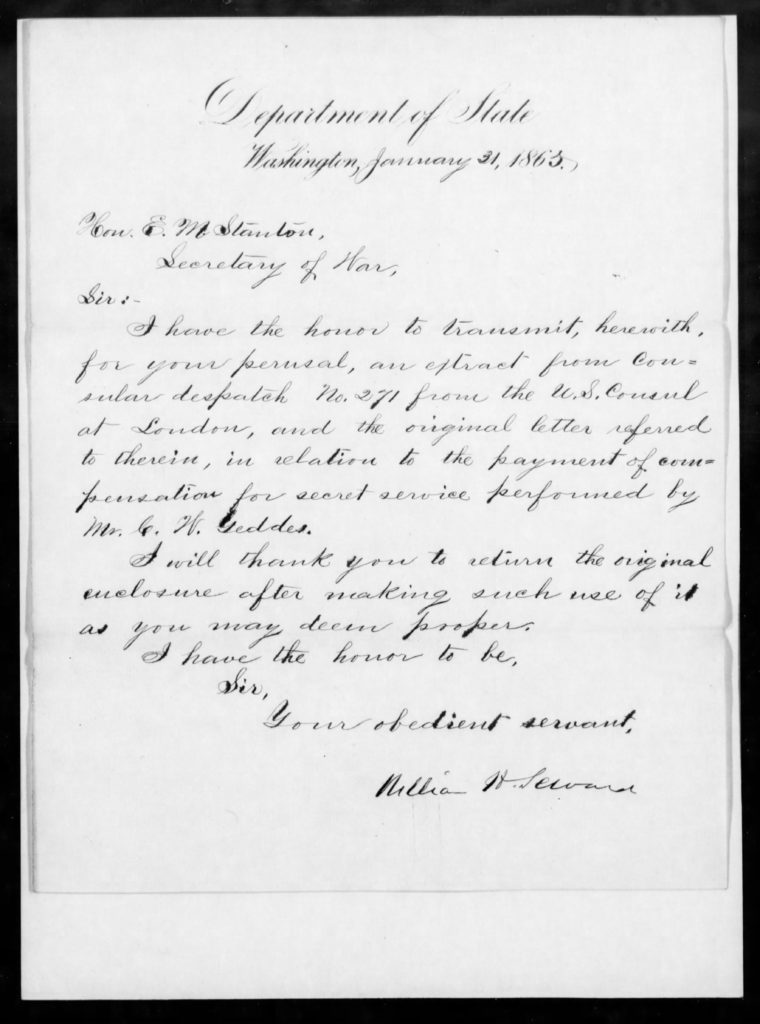 One of the top Naval Agents sent to England in 1861 by the Confederate Navy, to procure “iron clad” warships from British shipyards for the war effort, was Commander James Heyward North, of South Carolina.  North, a Lieutenant in the US Navy prior to the Civil War, was assigned to “Special Services Abroad.”

Although the South had several major ports, it had no shipping industry, few dockyards to build ocean going vessels, few machinists, and few facilities to produce iron.  The South did have cotton which supplied England’s vast textile industry and paid for the South’s never ending demand for ships, rifles, medicine, and other manufactures for war.

Consequently, the Union’s State Department, through their consular offices in Europe, employed a network of spies to ferret out information about Confederate activity, especially in England.  The Confederate Navy operated from two cities, London and Liverpool.  The Union divided their spy network accordingly. Liverpool was overseen by US Consul Thomas Haines Dudley and London, directed by US Consul Freeman Harlow Morse.

In Paris, July 1864, a baffled Commander North confided to a friend, “we have almost given up in despair ever being able to do anything in England.  The federals have so many spies and they are so active that it is impossible to do anything no matter how secret we may act, or how few we have engaged in it.”  Unfortunately, Commander North’s confidant was one of the State Department’s top spies, or “detectives,” as they were called, code named “G.”

In a report, Consul Morse commented about G, “He is considered by most, or all of them [the Confederates] who knew him, as one of their number and they speak as unreservedly to him about their doings as they do to each other.”

“G” is buried in Mount Moriah’s Naval Asylum Plot, Naval 3, Row 7, Grave 1, in a now unmarked grave.  Born in Baltimore, MD, October 20, 1826, Charles Wright Geddes (AKA C. Wright Geddes and C.W. Geddes) came to Philadelphia as a young man to study engineering at the Franklin Institute.  Upon completion of his studies, Geddes was appointed to the US Navy as 3rd Assistant Engineer aboard the USS General Taylor in November 1847 during the Mexican War.  Geddes later served aboard one of the Navy’s first steam powered warships, the side wheeler USS Mississippi, during a cruise into the Mediterranean.  However, his career with the Navy ended in August 1859 when he had to decline a promotion to First Assistant Engineer due to “malaria fever.”

At the start of the Civil War, Geddes “went South,” joined the Confederate Navy for a short period and served as First Assistant Engineer aboard the CSS Lady Davis commanded by Lieutenant Thomas P. Pelot, at Savannah, GA.  His father, Robert Geddes, gained a position with the Confederate Post Office in Richmond, but at the same time, his son Charles resigned from the Confederate Navy.  In June 1861, Charles married the niece of former US Senator Isaac Hayne (South Carolina) and was living in Charleston, SC.  Geddes initial service in the Confederate Navy is confirmed by captured Confederate Archives.

Life started to unravel for Geddes in early 1862.  His first wife and child died in Charleston and he was turned down by the Confederate War Department for an appointment as First Lieutenant with their Army’s Engineer Corps.  This is where his story gets murky.

During the summer of 1862, Geddes crosses through the Confederate lines and turns up in Nashville, Tennessee at the headquarters of Union General William S. Rosecrans – on his staff.  According to his obituary, Geddes was appointed to assist Captain Nathaniel Michler, Rosecrans’ chief of Topographical Engineers.  After previously resigning from the US Navy and before the war, Geddes had prior experience as a surveyor mapping out townships and borders in Kansas, Nebraska, and Oklahoma.

General Rosecrans was known for being the most well prepared general in the Union Army.  He relied heavily on his engineer staff for topographical maps.  Merged with intelligence obtained from his scouts and “secret service,” overseen by his notorious Chief of Army Police, “Colonel” William Truesdail, Rosecrans’ staff provided his Army of the Cumberland with a clearer picture of the battlefield.

Geddes’ obituary tells us that in preparation for the Battle of Stones River (near Murfreesboro, Tennessee, December 31, 1862-January 2, 1863), Geddes was assigned to trail Confederate General John Hunt Morgan’s troops and report back to headquarters on their movements.  Geddes was allegedly captured by Confederates.  In his possession were papers from Morgan’s headquarters. He was soon awaiting trial – as a spy.  “By a ruse,” according to his obituary, Geddes escapes and again picks up where he left off – trailing Morgan’s forces.

Meanwhile, in late March 1863, according to documents in the National Archives (see accompanying), an unknown informant provides details of Geddes’ pre-war background, his penchant for “Faro” and gambling, his service in the Confederate Navy, and his sudden appearance on Rosecrans’ staff.  Geddes seems to be well connected in Washington, DC circles, but the informant suspects that Geddes may actually be a double agent.  The informant considers Geddes to be a “sharp fellow” who needed to be watched.  The matter is referred to Rosecrans’ spy chief, “Colonel” Truesdail, for further investigation.

After Geddes escapes from Morgan’s forces, he is again recaptured and imprisoned at Knoxville, Tennessee.  When General Ambrose Burnside’s forces capture the Cumberland Gap and threaten Knoxville in September 1863, Geddes’ Confederate captors move him to a military prison for officers in Columbia, South Carolina – with orders to hold him until the end of the war.

Again, Geddes allegedly escapes from this Confederate prison and suddenly turns up in England “on a secret mission for the government.”  Although plausible, Union POW escapes from Southern jails were common, this capture, escape, recapture, escape scenario in his obituary has, so far, not been confirmed by historical records.  Geddes’ lengthy obituary in the Army-Navy Register neglects to mention that he actually served in the Confederate Navy and instead mentions only that he went to Charleston to marry his first wife and seek an appointment as an engineer, but “this appointment was not accepted.”  His New York Times obituary stops with his naval service in the Mexican War.

In the public mind, spies were considered unsavory deceitful figures.  They only became martyrs for the cause, by one side or the other, after they had been captured and executed.  The capture and escape scenario might have been a “route” the obituary writer used to get Geddes from Tennessee to London to make his story more sympathetic to readers.  During this period General Rosecrans had been defeated at Chickamauga and sacked.  Rosecrans may have simply recommended Geddes, with his naval background and prior service with the Confederate Navy, to Secretary of State William H. Seward for an overseas assignment.

Geddes “secret mission” in London is documented in the National Archives.  The accompanying letter from Seward to Secretary of War Edwin M. Stanton, dated January 31, 1865, requesting compensation for “secret services performed by Mr. C. W. Geddes,” confirms that Geddes was a spy for the Union in London.  John D. Bennett’s The London Confederates, briefly recounts Geddes’ exploits in London and Paris.  A more comprehensive historical account of the State Department’s efforts to frustrate the operations of the Confederate Navy in London can be found in two parts beginning with this link:

Charles Wright Geddes, a Naval Home beneficiary, died at the U.S. Naval Hospital, Philadelphia, PA on July 18, 1914, at the age of 87.  According to his obituary, despite his incredible story, Geddes’ “only reward for his long service” to the country was “a pension of twenty dollars a month as a veteran of the war with Mexico” and a grave, now unmarked, at Mount Moriah’s Naval Asylum Plot. 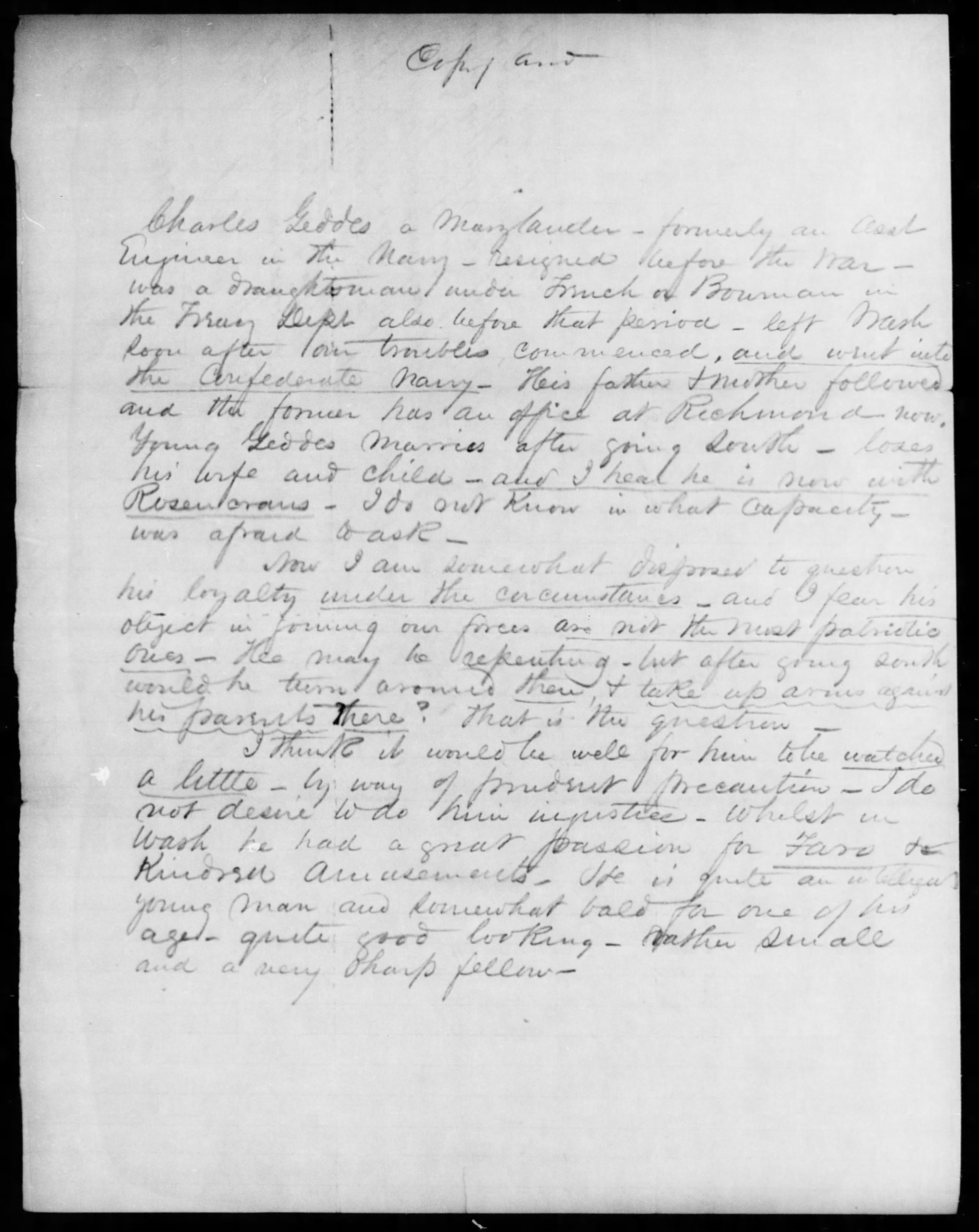 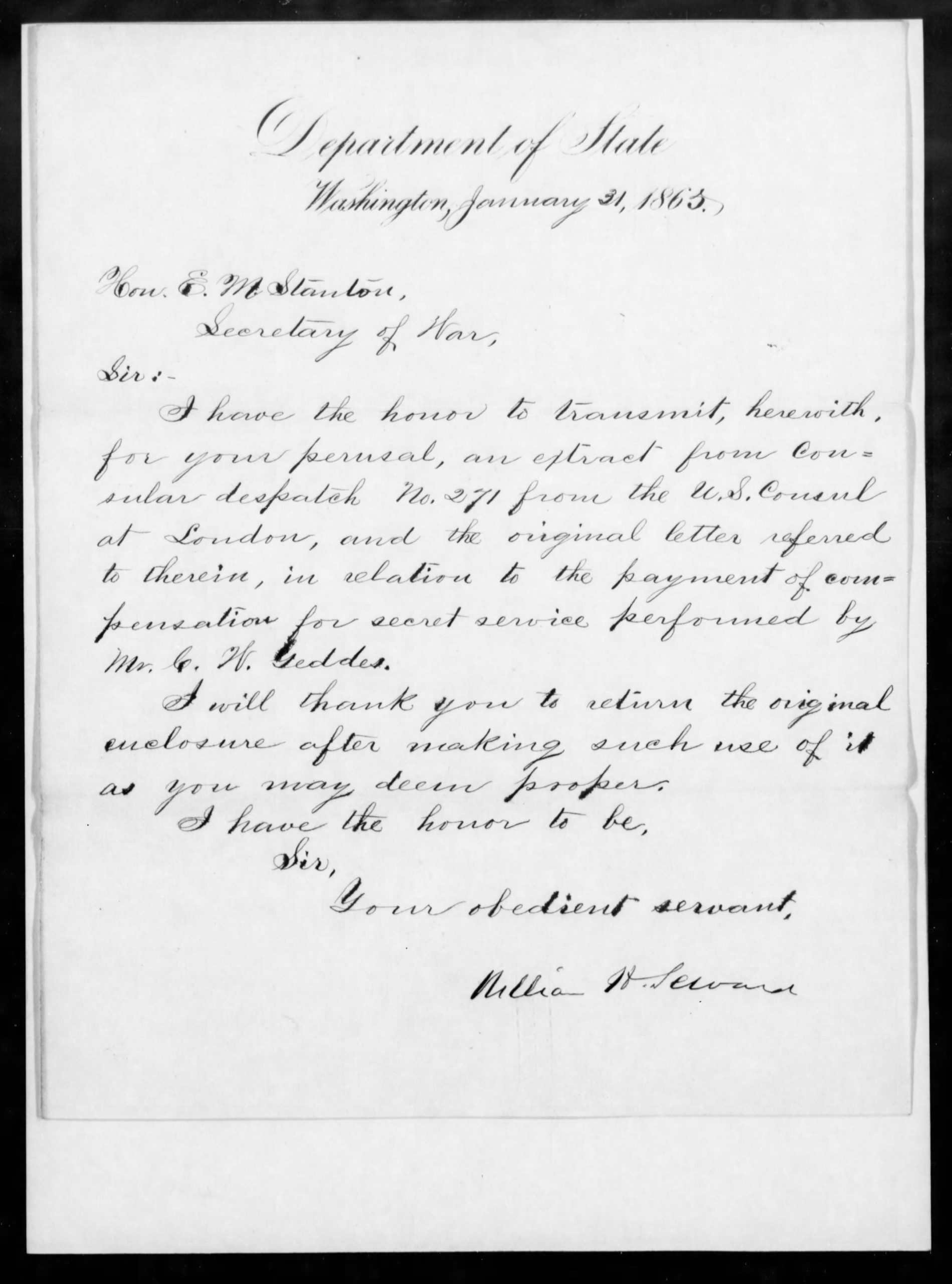